Herman Cain: I Would Offer Palestinians ‘Nothing’ For Peace, They Don’t Want Peace 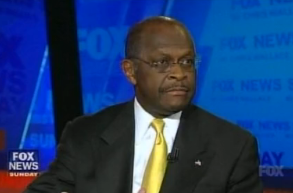 Republican presidential candidate Herman Cain appeared on Fox News Sunday this morning and attempted to prove to the naysayers that he actually is a candidate that should be taken seriously. Yet Cain’s answers to a few questions from Chris Wallace may have left some viewers not sure what to think.

All seemed to be going smoothly until Cain was questioned about the Palestinian right of return. When Cain seemed confused about the term, Matthews elaborated on the issue, asking whether Palestinian refugees should have any right to return to Israeli land. Cain wasn’t sure about what to do in Afghanistan either, yet explained “I think it’s disingenuous to tell the American people what I would do, when I don’t have the intelligence information.”

On lighter issues, Cain was able to return to his entertaining self. When Wallace asked whether his political action committee was broke, Cain adamantly declared “we are not broke” but wasn’t shy about admitting “we need more.”