Herman Cain: I’m Not Pro-Choice, I’m Pro-Choice On Getting An Illegal Abortion 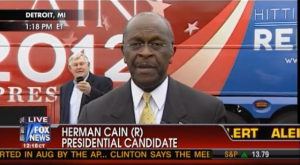 You’ll likely recall that, earlier this week, Herman Cain had an interesting, rather revealing discussion with CNN’s Piers Morgan about, among other issues, his stance on abortion. Cain told Morgan that, even though he is personally against abortion in all circumstances, (and I’m going to quote him directly, now, for comparison purposes), he believes that “I can have an opinion on an issue without it being a directive on the nation. The government shouldn’t be trying to tell people everything to do, especially when it comes to a social decision that they need to make.”

But now, two days after our post about that interview, Cain is telling Fox News that this is not quite what he meant, and that Morgan had conflated two separate issues into one question. So. Is Herman Cain a pro-choice candidate? Or what?

Here’s what he told America Live:

Look, let’s go back. See, he was asking me two questions. My position on abortion has been the same — on pro-life — has been the same throughout this campaign. And that is, I am pro-life from conception and I don’t believe in abortion. When he then tried to pigeon-hole me on my granddaughter being there as a victim of rape, then what would I do? The only point I was trying to make: A lot of families will be in that position and they are not going to be thinking, “Well, what does the government want me to do?” My position is no abortion. My position is no abortion. But all I was trying to point out was take the typical family in this country and you don’t know what they might do in the heat of the moment.

You know what? I would really like someone to ask the man taking pictures excitedly in the background what he thinks about abortion. Because, at this point, it just seems fair.

When asked directly about whether he believes abortion should be legal in the United States, Cain said that he does not and that, furthermore, “I will not fund any abortions by the government, I will sign in a legislation to de-fund Planned Parenthood and all of the other variations of this whole pro-life issue.”

He also insisted, once again, that he’d been trying to “make another point” during his interview with Morgan, and that some families may “make the decision” to break the law and have an illegal abortion:

Look, abortion should not be legal. That is clear. But if that family makes the decision to break the law, that’s that family’s decision. That’s all I’m trying to say.

But here’s my question to Mr. Cain: If that’s what you meant to say, then. You know. Why didn’t you just say that? Because (and, again, this is a direct quote, with emphasis added by me) “the government shouldn’t be trying to tell people everything to do” is just a little bit different from “the government can try to tell people what to do in matters of abortion, but people probably won’t pay attention to it, and will go out and get an illegal abortion anyway.”

This wasn’t about two separate situations, or about a different standard between your personal beliefs for your family and your belief about whether you think abortion should or should not be legal, and it is wasting people’s time for you to make that excuse. You said something, whether you believed it or not, and people had an issue with it, so now you’re backtracking. If that’s not what you meant to say, do the American public a favor and admit that you misspoke. But don’t try to paint this as you being the victim of some sort of complicated web of abortion and lies deftly woven by Piers Morgan. And this is coming from someone, by the way, who thinks that asking politicians whether their stance on abortion would change if their daughters are raped is silly and distracting and, again, a waste of time.

As a voter, I want to hear you articulate, very clearly, what you think about issues. And if you’re unable and unwilling to do that, I want you to step aside and give the platform to someone who has actually thought this thing through, has a firm grasp on the issues at hand, and is ready to let me know where he or she stands.

ANYWAY. Have a look at Cain’s interview for yourselves, via Fox News: