Cain: ‘Jon Stewart Doesn’t Like Me Because I Am An American Black Conservative’ 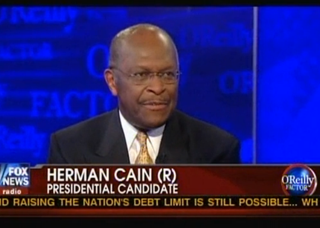 Herman Cain seems to have no interested in ending his newly-minted feud with Jon Stewart. On The O’Reilly Factor tonight, Cain came out swinging against Stewart again– who initially courted Cain’s wrath by making fun of his claim that bill longer than 3 pages would be vetoed automatically– explicitly stating that, although Stewart’s “Amos and Andy” voice was offensive to him, he wasn’t playing the race card. But Stewart had a problem, he asserted, with him being a “black conservative.”

Cain first began accepting Stewart’s adamant claims that Stewart is “a comedian,” and only a comedian, but that, precisely because of that, “he should have known” the “less than three pages” comment was a joke. “He’s a comedian, and I’m a problem-solver,” he asserted, though he did say that “when he mocks me in the dialect of old Amos and Andy, I think that’s a problem.” When confronted by host Juan Williams over that comment and how it contradicts his assertions that he was playing the race card, Cain argued that it was “some people in the media” who were playing the race card, and that his campaign and his statements were, he said familiarly, “not about color– it’s about content of ideas and it’s about character.”

Ultimately, however, Cain concluded that Stewart’s problem was not with him as a black person, but “Jon Stewart doesn’t like me because I am an American black conservative… he has a bigger problem with that than any race thing.” He added that “I know racism when I see it,” and that Stewart didn’t fit the bill. Williams agreed that black conservatives faced certain problems– “you don’t fit in the box”– though declined to emphasize the race issue.