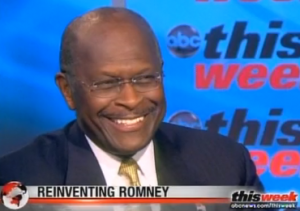 Republican presidential candidate Herman Cain joined the roundtable on This Week and discussed his own growing popularity as a contender for the Republican nomination while also commenting on Mitt Romney and Sarah Palin. After ABC’s Jonathan Karl described how Romney’s campaign announcement in New Hampshire was overshadowed by Palin and how Romney allowed his hair to get messed up, Cain started laughing and provided a few reasons why.

Christiane Amanpour was curious what sparked Cain’s laughter and he readily admitted it was partially because of Karl’s detailed reporting about Romney’s hair and explained:

“I was also laughing about the fact that yes Sarah has gained a lot of the headlines . . . and the other thing that I was amused about was – yes [Romney] had his announcement . . . and I contrast that to two weeks ago when I did my announcement and we attracted 15,000 people in the middle of the day.”

Cain suggested the enthusiasm from his supporters should start to silence conservative critics like Karl Rove who continue to dismiss him. About Rove and Charles Krauthammer, Cain argues:

“They are working off a traditional model of great name ID before you start out, whole lot of money, and you’ve held public office before. Well Herman Cain is just the reverse. But guess what’s happening? The American people aren’t looking at it from the traditional model standpoint.”

Amanpour seemed shocked that a successful candidate wouldn’t need money, to which Cain responded by showing off some of his personal charm and laughingly admitted “you need some!”