Herman Cain: My Campaign Is Not Entertainment, It’s ‘Inspiration And Excitement’ 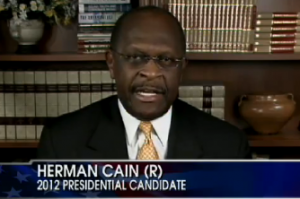 Republican presidential candidate Herman Cain has some words for his critics in the conservative political establishment like Karl Rove and Charles Krauthammer. Despite both of them dismissing him as “entertainment,” Cain warns that he is a very serious candidate and with new polls showing Cain as a legitimate contender, Krauthammer and Rove might want to soon start singing a different tune.

First, on the issue of Congressman Paul Ryan’s budget, Cain took a refreshingly different approach than some other presidential candidates like Mitt Romney and Tim Pawlenty. While both Romney and Pawlenty have been hesitant to endorse Ryan fully and caution that they would have their own budget plan, Cain instead declares:

“I support Ryan’s plan 100%. We don’t need to come up with another plan. The people who are backing away from Ryan’s plan, which is very well thought out – he’s already had it scored – they simply lack courage.”

Cain also targeted Democrats saying they are “not being honest with the American people” on Medicare and urged Republicans not to give up on Ryan’s plan since “American people are not stupid, explain it to them!”

Shifting to whether voters should really take him seriously, Cain addressed his critics “stuck in the old political paradigm” directly:

“Some people are calling my presidency entertainment. Mr. Krauthammer is one of my favorite political commentators, he was the first one to use that. But I think on this one, he’s gone off the road.”

Instead, Cain argued his critics are mistakenly concluding his “inspiration and excitement and energy” to be merely entertainment, when in fact that is what will resonate with Americans.