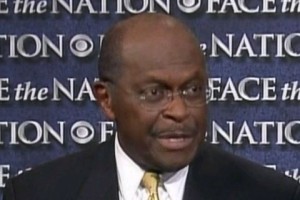 On Face the Nation today, presidential candidate Herman Cain questioned the legitimacy of the Occupy Wall Street protests and whether they were, as many people believe, a grassroots movement to stand up against the financial sector, or a way of distracting from President Obama’s economic policies.

Bob Schieffer played a clip of Cain saying that harboring anger at fellow Americans for being unsuccessful is anti-American. Cain also alleged in the video that the protestors were distracting Americans by focusing on those who create jobs as opposed to those who create job policy. Schieffer asked Cain if he still stood by those remarks. Cain argued that the protestors did not have a strong sense of priorities.