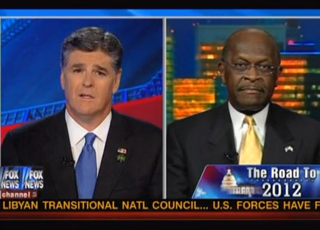 1990s celebrity Janeane Garofalo has somehow become once again an arch-villain of the American right, as she appeared on television recently to argue that Republican presidential candidate Herman Cain had “Stockholm syndrome” and was “getting paid” to run as he was African American. Cain, as one can imagine, didn’t respond very positively to the attack– not because he cared about the claim, but, as he told Sean Hannity tonight, “whoever is supposed to pay me is behind on their payments.”

Cain appeared on tonight’s Hannity to discuss the comments, which he told the host he found “pathetic and hilarious.” “If Janeane Garofalo and these other loonies believe I’m getting paid, can they send me the number?” he joked. He argued that it was a liberal staple to “either call you names or attack your personality,” so he paid no mind. Hannity also turned to comments from Rep. Maxine Waters that the Tea Party “can go straight to tell” at a town hall meeting, which Cain called a “double standard.” “The American people want results, and all they can do is name-call,” he argued, adding that he also found distasteful that Vice President Biden is out in China “making nicey-nice” because “he doesn’t want them to say ‘we’re not buying any more of your debt.'”

Hannity ended the interview on a foreign policy point– with the Libyan crisis, on which Cain argued that President Obama “decided to follow rather than lead,” and took his hat off to the leaders of the UK and France. “The President wanted to follow from the rear, so he can’t sit back now and say ‘look how well our strategy worked,'” he concluded.