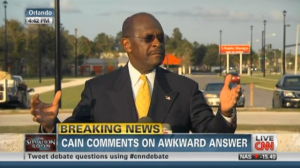 He goes on to talk more about the interview, and what was shown and hot shown, asked and not asked.

Update: In defense of Herman Cain, a rebel’s account of the turmoil in Libya did offer links between his country and the Taliban, as well as to Al Qaeda. You can read an LA Times article about these alleged links, right over here. Here’s the pertinent section:

There was only one place for Mohammed to go: back to Afghanistan, under the protection of the Taliban. He spent time studying in military camp, and in classes on politics and Islam. About 100 members of the LIFG congregated in Kabul, the capital, longing for the day when they could kill Kadafi and rule Libya in accordance with Islam.

Here Mohammed would have his encounter with the two men who shaped the future of radical Islam: Bin Laden and his chief lieutenant, Ayman Zawahiri.