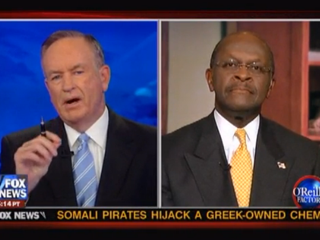 Herman Cain has a lot of problems on his plate, but he is facing the cameras, and tonight did another extended interview, this time with Bill O’Reilly. While he spent half the interview discussing the recent sexual harassment charges, it is the second half of the interview– on foreign policy– where Cain lets out some new views, including the fact that a war with Iran doesn’t seem to faze him, nor does he consider putting warships on the Persian Gulf a “provocation.”

O’Reilly began the second half of the interview broadly, asking Cain, “what area of the world concerns you the most?” Cain said that, “obviously,” the Middle East was the most problematic region because of Israel’s position there and Iran’s belligerence. He also repeated comments that he would “have to evaluate the situation at the time” when it came to Iraq and other countries and “commanders on the ground,” but that one step to keep Iran at bay would be “serious energy independence.”

On that latter point, O’Reilly didn’t see the connection, and tried to push him to explain how making Iran sell more oil to China would be of help. “They depend on oil prices,” Cain replied, and suggested that energy independence “is going to impact the world prices of oil about a third.” Aside from energy independence, however, Cain noted that he would “maximize the use of our ballistic missile defense capability” because “Iran understands only two things: economic pressure and our military might.”

RELATED: Planned Parenthood Responds To Herman Cain’s Criticism: Cain Is ‘Clearly Out Of The Mainstream In His Attack’

O’Reilly noted that putting more missiles near Iran would be a certain invitation for the nation to attack us. Cain appeared unfazed: “that’s alright.” “Then you’re in a shooting war with Iran– you want that?” Cain replied that Iran was “going to put their ships on our coasts,” so a reciprocal action isn’t “a provocation.”

In the next segment, O’Reilly assessed Cain’s performance on foreign policy with Monica Crowley and Alan Colmes, neither of which seemed very impressed. While Colmes outright said he didn’t think Cain knew what he was talking about, Crowley simply stated that President Obama didn’t seem to know what he was doing, either, when it came to foreign policy.