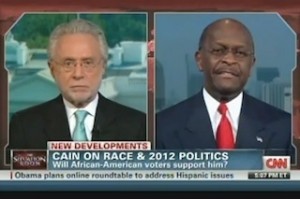 Cain candidly singled out Rick Perry’s position on immigration as a non-starter. “Him being soft on securing the border is one of the reasons. I feel strongly about the need to secure the border for real, the need to enforce the laws already there, the need to promote the path to citizenship, but more importantly, empower the states to enforce the national federal immigration laws because the federal government didn’t do it, can’t do it and never will do it, so that’s the where I think he and I have a difference of opinion.”

Cain also referred to African American voters as being “brainwashed” in their persistent support of Democratic candidates. “Many African-Americans have been brainwashed into not being open minded, not even considering a conservative point of view. I have received some of that same vitriol simply because I am running for the Republican nomination as a conservative. It’s just brainwashing and people not being open minded, pure and simple.”

With Cain’s win in the Florida straw poll and strong performance at the last GOP debate, the former pizza king has rocketed into the top-tier of Republican candidates with his polling extending into double-digits. His suggestion that he would not support Rick Perry in a general election is sure to raise some eyebrows though.

Watch the interview below, courtesy of CNN: