Herman Cain: 'I Do Have To Dial It Back A Little Bit'
VIDEO

Herman Cain To Neil Cavuto: ‘I Do Have To Dial It Back A Little Bit’ 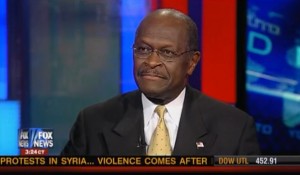 Herman Cain joined Neil Cavuto in the studio on Friday, and he hit on a wide range of topics, from his hatred of political speak to the true origins of his 9-9-9 plan. But his most interesting comments came when Cavuto asked if he had to tone down the jokes and flippant comments a little more:

Cain, who said he never has intentions of being offensive, believes that people have connected with him because of his fun personality and plain talk. He mocked a generic political candidate to Cavuto as an example, stiffening up and speaking in a robotic tone. “I know how to act the presidential image if that’s what they want, and bore them to death like a lot of other people, and speak political speak,” Cain said, in character, before dismissing the idea. “If I ever get to the point that I have to not be me in order to run, I’m not running.”

Cain also dropped a 9-9-9 bombshell, revealing to Cavuto that the ubiquitous tax scheme didn’t start that way. His economic adviser, Rich Lowrie, actually figured out that the numbers they needed to replace the five taxes Cain would be eliminating was far less catchy: 8.75 across the board. “I said, ‘Rich, who in the world is going to be running around talking about 8.75, 8.75, 8.75? We’re going to call it the 9-9-9 plan.’ He said, ‘Okay boss.'” And with that, a piece of Americana was born.

Enjoy the video of Cain’s talk with Cavuto below, courtesy of Fox News: