Herman Cain To Sean Hannity: ‘I Am Now Going To Change Washington D.C. From The Outside’ 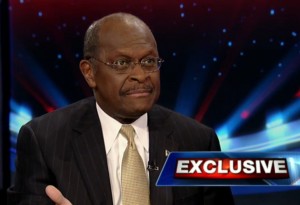 Herman Cain joined Sean Hannity on Thursday night for his first major interview since suspending his campaign last weekend, and the two ran through several topics, from Cain’s future plans to what, exactly, “suspend” means.

“It means ‘end,'” Cain said. “There are no plans to re-emerge.” When asked what caused him to drop out, Cain said that, “it boiled down to two words: family first. I saw the pain it was causing my wife, and I wasn’t going to let that happen.”

Cain also revelaed that there will be evidence coming out soon that will prove he is innocent of the accusations levied against him. He believes that if he continued in the race, however, more accusations would have been coming down the road, based on how the first few played out. He told Hannity that he felt both the left and right were behind the personal attacks (although he admitted he had no proof). Still, Cain did say that if he kept going, he could have eventually bounced back and recaptured the hearts of the American people:

As for future plans? An endorsement, he says, is on the way. He just wants to study the candidates a little more. And he didn’t rule out a television or radio career, but he told Hannity that, “I am now going to change Washington, D.C. from the outside, with the backing of the American people.”

Watch the clip of Herman Cain’s interview with Sean Hannity below, courtesy of Fox News: