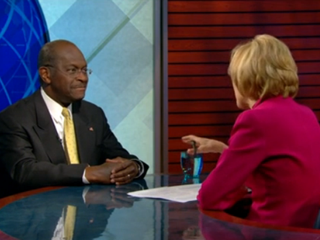 The post-sexual harassment Herman Cain media blitz that has kept up all week has done a great deal to understand the workings of the Cain campaign in crisis, but there is one other element of Cain’s platform that seems to be getting hit the hardest by his exposure to the press: his foreign policy credentials. Tonight on The O’Reilly Factor, Cain essentially said he was ready to declare war on Iran; last night on PBS’s Newshour, he told Judy Woodruff he suspected China was “trying to develop nuclear capability,” despite having nuclear weapons since 1964.

RELATED: Herman Cain Tells Bill O’Reilly He Is Comfortable With A ‘Shooting War’ Against Iran

Woodruff began the interview asking whether China was “a potential military threat to the United States” in Cain’s eyes. Cain answered in the affirmative, and responded that in order to neutralize the threat, he would “outgrow China” economically. Then he noted that the threat was assuaged significantly by the fact that “we already have superiority in terms of our military capability.” “I plan to get away from making cutting our defense a priority,” he noted, stating his motto as “peace through strength and clarity.” He then turned to the threat he saw he would need to stop: “they’ve indicated that they’re trying to develop nuclear capability and they want to develop more aircraft carriers like we have.”

RELATED: Herman Cain: Someone Is Encouraging These Accusers Now Because I’m Doing So Well

The problem with this claim, of course, is that China is not exactly “trying” to develop nuclear capability any more than America is– they staged their first nuclear weapons test in 1964. Cain didn’t clarify what he meant by that phrase, but it certainly doesn’t make him look particularly knowledgeable to not know that China has nuclear weapons. Woodruff, on her part, did not comment on his statements and moved on to another topic, seemingly unaware of the fact that Cain’s statement seemed to belie the fact that he had no idea that China was a nuclear nation, and that this is common knowledge in the political world– leaving Cain without the chance to clarify yet another murky policy statement that his staunch supporters will argue is being unfairly wielded as a weapon against him.

The segment via PBS below: