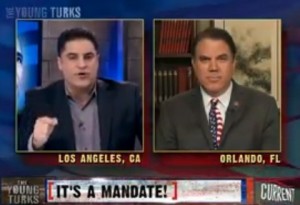 After a two-year absence, former Congressman with Guts® Alan Grayson is now the Congressman-Elect With Guts thanks to his convincing 62% to 38% trouncing of Republican Todd Long in Florida’s 9th congressional district. Rep.-Elect Grayson now also figures to return to his position as the most reliable source for pungent Democratic sound bites and outraged Newsbusters articles, beginning with his appearance on Thursday night’s The Young Turks, where he told host Cenk Uygur that Democrats should oppose any “Grand Bargain” that included cuts to Medicare and Social Security.

After two years of tough talked aimed at Republicans who want you to “die quickly” and Democrats who “belong on Fox,” Grayson lost his reelection bid against Daniel Webster (whom he dubbed “Taliban Dan”) by 18 points. Grayson kept himself in the media spotlight during his time in the congressional wilderness, then mounted a campaign for a newly-created district, a campaign that resulted in that 24-point landslide over Long. Now that he’s back, Rep. Grayson is determined to block any effort at a “Grand Bargain” that includes cuts to Medicare and Social Security.

Cenk enthusiastically agreed. “It’s so refreshing to hear  Democratic congressman actually say that,” Cenk said. “Unfortunately, not only do you have the Republicans against you, it appears you have the (Obama) administration against you, they can’t wait to do this ‘Grand Bargain.’ How in the world do progressive Democrats fight back to make sure that doesn’t happen?”

Grayson responded that Democrats have to make voters aware that there’s a third choice, besides Republicans demolishing Medicare and Social Security, and Democrats meeting them halfway. “Somebody has to say… we’re not going to strip money from people in need, we’re not going to throw grandma from the train.” Grayson said, adding that any Democrat who supported such a deal would face a primary challenge in 2014.

“The Democratic Party should be united,” Grayson continued. “We are the party that created Social Security. We are the party that created Medicare. We should stand behind it, and we should protect it. It’s amazingly popular among the voters. Why should we shoot ourselves in the head by saying we’re going to end these programs, or even cut back these programs, when we created them, and the voters love them?”

Grayson is entirely correct that the “fiscal cliff” is a completely manufactured crisis, stamped “Made in Republican America.” The GOP put a gun to the economy’s head by threatening a US government default, and the result (in addition to the first-ever downgrade of the US’ credit rating) was the deep sequester cuts that will take effect January 1st if no deal is reached, in addition to the expiration of the Bush tax cuts.

However, Cenk and Rep. Grayson aren’t recognizing the fact that President Obama has left himself room to maneuver. While he has said he is open to entitlement reform as part of a “Grand Bargain,” the President has also said he opposes cuts to benefits. That entitlement reform could well take the form of raising the Social Security tax cap, and/or cost saving measures for Medicare similar to those instituted under Obamacare, such as allowing Medicare to negotiate drug prices. The President’s prior willingness to negotiate with fiscal terrorists is what alarms people like Cenk and Alan Grayson, but this is a new day. President Obama has some wind at his back, and no more elections to win or lose.