Hewitt: If GOP Works with Obama on Immigration, He’s Going to ‘Blindside’ Them Again
video

Hewitt: If GOP Works with Obama on Immigration, He’s Going to ‘Blindside’ Them Again 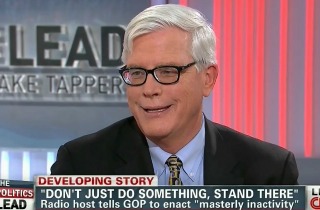 Conservative radio host Hugh Hewitt sat down with CNN host Jake Tapper on Wednesday and was asked about the media and Democratic characterization of the Republican Party as the “party of no.” Asked if pursuing immigration reform was a smart way to shed this label, Hewitt said that it would be inadvisable for the Republicans to work with President Barack Obama on anything after he has “blindsided” them so often in the past.

Tapper remarked on a portion of Hewitt’s blog in which he says the Republicans should refuse to negotiate with the president on any initiative because he has “routinely breached his every commitment to them.”

Asked if this would reinforce a media critique of the party, Hewitt responded by quoting an 19th Century British prime minister who he said smartly advocated for “doing nothing well” in government. “The Republicans seem to do nothing well on immigration and spending,” Hewitt observed.

“They need to focus all their activity on Obamacare’s rollout and the actual facts act it, and on the aftermath of Benghazi,” Hewitt advised. “They don’t need to advance an immigration bill.”

“They don’t need to walk into the president’s Roosevelt Room and get hammered again as happened last year during the shutdown when they thought they made progress, and the president emerged and basically clipped them, hit them from the blindside,” he concluded. “Now is the time to wait for November ’14 and see what the country thinks about Obamacare, then move forward.”