Hey, CNN? Can We Talk About What’s Going On Between You And Ron Paul?
Video

Hey, CNN? Can We Talk About What’s Going On Between You And Ron Paul? 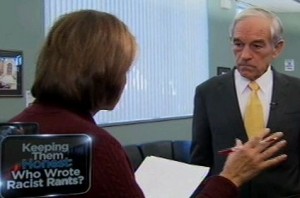 CNN, boo boos, can we talk? I’m getting a little worried about you. Here, sit down. Have some of this Wolf Spritzer I picked up at your gift shop. No, yeah, it’s pretty good. Tastes like berries. Berries and gravitas.

So. Are you and Ron Paul having, like. A thing?

Yesterday, when Paul sat down with Ali Velshi, Velshi brought up a newsletter (or, at this point, The Newsletter™), sent out two decades ago, which espoused some pretty problematic racist beliefs. Paul, as he has done each and every time he’s been asked about The Newsletter in recent years, maintained that he did not write those things, adding that “those aren’t my beliefs. So I sleep well.” Velshi pressed on, and Paul advised doubters to actually read what he’s written, read the newsletter in question, and find out the truth for themselves.

Then, today, Gloria Borger asked Paul about the newsletter yet again.

Why don’t you go back and look at what I said yesterday on CNN and what I’ve said for 20 something years. 22 years ago? I didn’t write them, I disavow them. That’s it.

Borger, like Velshi before her, pressed on, telling Paul that, whether or not he agrees with the sentiments expressed in the newsletter, he made money off them. She then continued to ask if it was “legitimate” to ask about the newsletter. Paul eventually removed his mic and walked off, possibly because one can only answer the same question so many times before doing the politician’s equivalent of taking off one’s earrings and reaching for the Vaseline.

“I did have to ask them,” Borger later said of her line of questioning. “He clearly thinks its irrelevant. He thinks it’s been asked and answered…It’s clearly a question he’d rather not be asked.”

Now, tonight, you go after the guy again. Sanjay Gupta, sitting in for Anderson Cooper, reported that Paul has a tendency to get “kind of prickly” when asked about the newsletter, which is an interesting way of spinning the fact that the guy is tired of answering the same question from your network. Dr. Gupta then added that Paul’s story regarding the newsletter has “changed over the years,” before looking back on an interview Paul had given to Wolf Blitzer back in 2008. In that interview, Paul said that he didn’t know who wrote the offending articles, and that it was the job of the newsletters’ editor (and, thus, not their publisher) to take a close look at these writers and their content. What’s more, he said, he was busy traveling and tending to his medical practice at the time and, thus, did not have the luxury of being able to read through each and every newsletter.

In an effort to “keep him honest,” Gupta noted that, in 1996, Democrats had brought to light other articles — ones that Paul admitted to have written — including one in which he surmised that the activities of 95 percent of DC’s black male population is “semi-criminal or entirely criminal.” When asked about these, Paul denied being a racist or resorting to racist stereotypes in his articles.

Five years later, however, Paul said that these were “never his words,” but that he nonetheless had “some moral responsibility for them.”

To discuss it even further — because, of course — Gupta brought on Borger, Ari Fleischer, and Erick Erickson. And Elmo and Jon Bon Jovi and Keyboard Cat.

Tell me, CNN. Is all this because he’s gained traction in Iowa? Is he just the latest Notmitt Notromney to have captured the media’s attention and, as such, its subsequent ire? Put more plainly: Why cover this now? And why so much? You’re not looking at a decades-old story from a different angle, you’re not revealing new information, you’re merely reheating the same embarrassing, racist meal (just…. go with it) you keep serving us every few years. This is becoming, at this point, the McRib of Embarrassing Political Stories. Why?

Watch the CNN segment for yourselves. And, as always, let me know what you think: