Hey Everyone, You Need To Stop Smoking Weed Right Now, Because Miss Universe And O’Reilly Say So
video

Hey Everyone, You Need To Stop Smoking Weed Right Now, Because Miss Universe And O’Reilly Say So 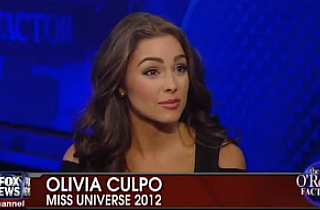 Newly-crowned Miss Universe Olivia Culpo was brought into the “No Spin Zone” last night for the sole purpose of agreeing with Bill O’Reilly that pot is bad and no one should be able to use it legally because it ruins lives by forcing you to be a liberal and listen to rock music and such.

In this particular segment, basically every “fact” said was downright wrong… and Culpo’s posturing as an anti-pot crusader was, shall we say, hilariously transparent.

O’Reilly began the segment by introducing the fact that the recently-crowned Culpo believes that pot use is “not a positive thing,” teeing up what is sure to be a 5-minute agreement-fest over the fact that marijuana kills your grandma’s dog and everything you’ve ever loved.

But gee, Bill, I wonder why the Miss Universe winner is going to be anti-pot, anti-drinking, and anti-everything. Is it because the “facts” are on your side and she’s just another one who sees the “get off my lawn, you ignorant hippies” light? Or is it because if a Miss Universe is caught so much as uttering a curse word, she becomes the subject of derision. This is, after all, Donald Trump‘s competition, and the contestants and winners have to play by his rules.

So would Culpo go to one of those newfangled pot clubs in legal states like Colorado? “No. No way. Not where it’s legalized.” So wait, she’d go where it’s not legal? I’m confused.

She then repeats a common line that the legalization of marijuana “sends the message that it’s harmless.” To which O’Reilly said: “Absolutely that’s what it does.”

Except that’s not what it does. Do we think liquor is “harmless”? No. But it’s legal because people — especially adults — can make the choice about what to put in their bodies. And they can face the consequences of their actions if they do something embarrassing or illegal while under the influence of the product, and — wait, why am I even bothering with this? Yes, that’s absolutely what it does; simply no other way to see it.

“How did you formulate an anti-recreational use platform?” O’Reilly asked, clearly ignoring the point from four paragraphs above. Since he must’ve missed it, I’ll repeat it: Because she’s Miss Universe and if she were to endorse any remotely controversial behavior (alcohol, pot, sex before marriage, cursing, being nude, witchcraft) she would be in deep trouble.

But moving along, here’s where things start to get real shifty: Culpo then concedes that medicinal marijuana has its benefits. She says that it can help the terminally ill and people with mental illness, but then when pressed on why pot is bad (because that’s all O’Reilly really wants to hear), she says: “Because everyone has a different reaction to it. Some people get paranoid. It’s been proven to increase schizophrenia even.”

So let’s break this down: Culpo believes marijuana can be helpful for the mentally ill, but it also causes schizophrenia? Huh?

And no… marijuana has NOT been proven to cause schizophrenia. See the plethora of studies in pretty much any major pharmacological medical journal. Or not. Because we know how little the facts actually matter when pot gets discussed on a primetime conservative opinion show.

The two then went on to agree with each other on how everyone knows someone who has had a bad reaction to marijuana, and thus it’s a bad thing that no one should ever be legally able to enjoy. But here’s a pesky little thing that neither of them seem to realize: the same thing goes for alcohol. But why isn’t alcohol illegal? It sure does ruin lives. And the government’s own studies have found it (and nicotine) to be leagues more addictive than marijuana. I am in no way advocating for the prohibition of either substance, but you see how this line of logic is, um… flawed?

Culpo seemed hesitant at the idea of becoming an actual anti-pot campaigner, as O’Reilly said she’d only be effective at telling the kiddies to lay off the bong if she actually believes it. And so, he had to put her convictions to the test:

“You ever smoke pot?” he asked.

“I can’t answer that,” she replied with a nervous laugh.

“No way!” Culpo replied. She also said she doesn’t drink because she’s 20 and has to respect drinking age laws.

But here’s where the entire “anti-pot crusader” image was revealed as a sham. O’Reilly asked: “Intoxication is not for you?”

She pauses. Clearly hesitates. “Definitely not for me… during this job. While I’m an international role model.”

In other words, “Once a new Miss Universe is crowned……”