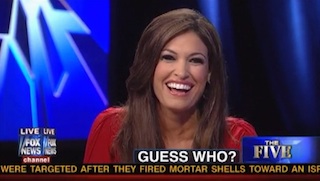 Well, it was bound to happen eventually. After a month and a half of getting content from Fox News’ The Five (and we’ve gotten some doozies), they finally took some content from us. During a segment on today’s show, they totally ripped off our “GOP candidates as adorable children” slideshow from this morning, used the same exact pictures, and didn’t even give us a hat tip. We here are absolutely furious. I mean, come on, guys. You work in a visual medium. You could literally have tipped a hat. (UPDATE below)

This is so typical. Big time TV shows think they can just liberally steal from the little Internet and no one will care. Well, I say enough is enough!

…ok, maybe we don’t have the strongest leg to stand on. But still! You used the same exact pictures! Do you have any idea how long it took us to go on Google Image Search to find them?! A while! We kept getting distracted reading Steve Jobs tributes!

And, you know what, we’re still pissed off that you never gave us credit for coining the “crazy uncle” nickname for Beckel! We said that first, darn it!

Watch the blatant example of theft from Fox News below:

UPDATE (8/26): On the next day’s show, The Five gave a very nice apology for not giving Mediaite credit for the idea, thus ruining our chance to get a giant cross-media feud. Stupid, classy show. Fight us!