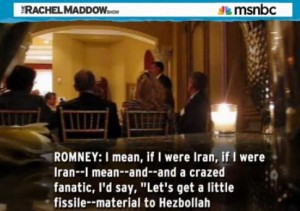 The hidden camera video of Mitt Romney‘s megabucks May fundraiser is such an embarrassment of glitches for the Romney campaign that it’s tough to keep them all straight, let alone choose favorites. On Tuesday night’s The Rachel Maddow Show, host Rachel Maddow highlighted an important issue that’s been missed in the fallout, one which could result in literal fallout: Mitt Romney doesn’t know what a “dirty bomb” is. However, even Rachel missed a devastating whopper that, in and of itself, should disqualify Romney from ever holding national office.

Most of the media attention surrounding the hidden camera video of a May 17th fundraiser has centered on Romney’s comments about the freeloading 47%, but now that the full hour of tape is out, there are many more disturbing moments to choose from. Even in the subset of foreign policy, there are multiple quotes from a candid Mitt Romney that demonstrate his complete unfitness to lead. On her show last night, Rachel Maddow pointed out that one such quote, about the consequences of an Iranian nuclear program, demonstrates stunning ignorance about the difference between a dirty bomb and a nuclear bomb:

Here’s the quote Rachel was focusing on:

“If I were Iran, and a crazed fanatic, I’d say let’s get a little fissile material to Hezbollah, have them carry it to Chicago or some other place, and then if anything goes wrong or if America starts acting up, we’ll just say, “Guess what, unless you stand down, why we’re gonna let off a dirty bomb.”

Rachel’s absolutely right, you don’t need fissile material to make a dirty bomb, and in fact, using fissile material (which is material capable of sustaining a nuclear chain reaction) in a dirty bomb would be a horrible waste, like throwing bullets at someone instead of putting them in your gun. She’s also right about the ease with which you can acquire radioactive material. Remember the Radioactive Boy Scout? David Hahn built a nuclear reactor in his shed using radioactive materials harvested “household products, such as americium from smoke detectors, thorium from camping lantern mantles, radium from clocks and tritium (as neutron moderator) from gunsights,” and while he was caught before he could get it to work, his mother’s property was subsequently designated a Superfund site.

That’s some truly frightening ignorance, country miles ahead of anything that came out of Sarah Palin’s face in 2008, or since. But if you let the tape run a little bit further, Romney reveals a fatal weakness. Check out his description of the nightmare dirty bomb scenario (emphasis mine):

If I were Iran, and a crazed fanatic, I’d say let’s get a little fissile material to Hezbollah, have them carry it to Chicago or some other place, and then if anything goes wrong or if America starts acting up, we’ll just say, “Guess what, unless you stand down, why we’re gonna let off a dirty bomb.” This is where we head, where America can be held up and blackmailed by Iran, by the mullahs, by crazy people.

Can you spot the two glaring problems with that statement, besides his ignorance of what a dirty bomb is?

The first, most important one is that Romney is saying that all it would take to “hold up and blackmail” the United States under a Romney presidency would be he threat of a dirty bomb attack.

The secondary problem reminds me of an old comedy bit from Fred Stoller in which he says his mother is always bugging him to go back to college, and when he asks her why, she says “So you can say you’re a college graduate.”

Stoller then says “Like I can’t say that now?”

Under a Mitt Romney presidency, terrorists (or even enterprising 47 percenters) wouldn’t even need a dirty bomb to bring America to its knees, they’d just need the ability to pronounce the syllables “Dur-tee bom.”

This situational gullibility is a pattern for Romney. Elsewhere on the hidden camera tape, he recounts how he eagerly swallowed a line of bullshit from a Chinese factory about how many mistreated workers leave and never return because they’ve “saved enough money.”

My theory on this is that Romney is easily gulled on certain matters because he views foreign policy the way a businessman would. While Romney has little to offer in the way of specifics on national security threats like Iran, his foreign policy is most animated when it comes to countries that are economic competitors to the United States. Russia is our number one foe, China is a sea of cheaters (whose workers go off to live on a farm with Seamus when they’ve made enough money), but when it comes to real issues of national security, he punts. He uses President Obama‘s “red line” on Iran, his timeline on Afghanistan, and he plans to literally punt on the Mideast peace process, which is vital to Israel’s long-term security, and by extension, our own.

Yet the mainstream media continues to abdicate its responsibility, simply observing that foreign policy won’t be an issue in this campaign, rather than performing their duty to make it an issue if it needs to be. That’s what journalism is for, to inform people about things that are important, and why they are important. The fact that one of the guys running for president doesn’t know what a dirty bomb is, and is willing to be blackmailed at the mere threat of one, that’s important, and Romney should be asked about it. The mainstream press ought to be reporting that the last time he ran for president, Mitt Romney couldn’t decide whether he would ever have the authority to attack Iran, said that in such a scenario, he would have to “check with the lawyers,” or that he said he would not take unilateral action in Pakistan to kill Osama bin Laden, or any other terrorist. He hasn’t been asked about either since then.

It’s not enough to just say “People care about the economy and jobs,” not when a candidate is this unfit to command our military and diplomatic apparatuses. If someone’s house is on fire, you don’t stand outside and say “This family is very engrossed in that episode of Here Comes Honey Boo-Boo,” you tell them to get the hell out of there. The world is a dangerous place, a lot more dangerous than Vietnam-era France, and Mitt Romney isn’t up to the task of leading it.