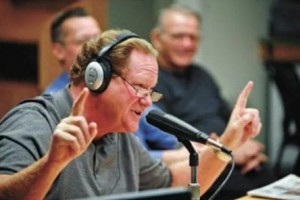 MSNBC host Ed Schultz came under fire from Keith Olbermann recently over Schultz’s criticism of Michael Moore‘s “hand-wringing” over the killing of Osama bin Laden. Liberal columnist and local radio host David Sirota got in on the act last week, slamming Schultz over the remarks. Schultz got wind of it, and called Sirota’s show. A fiery exchange ensued, in which Schultz told Sirota to “Go to hell,” and ended with Sirota muting Schultz, who was then disconnected.

Even as Osama bin Laden was just beginning his eternal journey from the bottom of the oceanic food chain, liberal filmmaker Michael Moore began a drone attack of irksome, knee-jerk statements about how America “lost something of our soul” in killing bin Laden instead of giving him a trial, how the celebrants at Ground Zero offended both his Old and New Testament sensibilities, and that bin Laden “was executed.”

Schultz then denounced Moore’s “hand-wringing” on The Ed Show, quite effectively arguing that this is what we (liberals) elected President Obama to do, that he has been promising to do this very thing for almost four years, now.

It is important to note that neither Ed, nor I, ever suggested that Moore, or anyone else, should not question the government. That’s important, because that was the accusation that Keith Olbermann made of Schultz, obliquely calling him a “supposedly liberal commentator on a supposedly liberal network.”

It’s an attack that Sirota picked up, falsely accusing Schultz of “screaming at other people not to ask questions of their government.”

He then plays an out-of-context quote of Schultz saying, “The fact of the matter is, the intellectual liberal hand-wringing needs to stop in this country.”

Schultz’s statement was made in the context of demonstrating that Michael Moore’s statements were based on a complete ignorance of the facts. The problem wasn’t Moore’s questions, but rather, the answers he pulled out of his ass. Bin Laden wasn’t “executed” or “denied a trial,” he was killed in a military operation that offered almost no chance of capturing him safely.

Sirota and Olbermann would have been right to defend Michael Moore’s right to be wrong, but instead, they chose to attack Schultz for pointing out that he was wrong, and they did so dishonestly.

Sirota is a well-respected figure on the left, but his performance here was yellower than a canary in a taxicab. Schultz’s nationally syndicated radio show follows Sirota’s on Colorado 760AM, and as Schultz hilariously explains, he “doesn’t listen to” Sirota’s show, but when some locals called Schultz to tell him Sirota was “ripping” him, he called in to fire back. Things heated up quickly, as Schultz tried to explain that questions had been asked, and answered by the Attorney General, at which point Sirota accused Schultz of the Nixonian attitude that if the President says something’s legal, that makes it legal (Schultz said no such thing). Sirota elected to “put (Schultz) on hold,” after which Schultz was “gone.”

This isn’t the first time that Schultz has been attacked by fellow liberals, and it won’t likely be the last. Olbermann and Sirota are members of the prevalent “smarter-than-thou” segment of the left who think outside the box, but only at prearranged coordinates. This sometimes clashes with Schultz’s more working-class, red-meaty brand. While Olbermann is already a proven commodity, this exchange demonstrates the key to Schultz’s growing success: agree with him or not, he wears the fire in his belly on his sleeve.