Hide Your Bibles, Hide Your Kids, Because Muslims Are Coming! Or So Suggests Fox News’ Todd Starnes 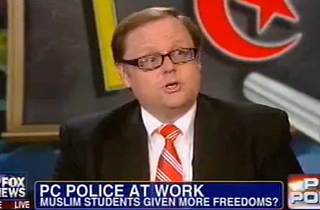 Fox News radio host Todd Starnes visited Fox & Friends this morning to remind everyone that his Sharia law alert level is still at full-blown code red, and you should probably clutch your pearls as hard as possible.

Starnes is a frequent guest on Bryan Fischer‘s AFA radio show, which should give you at least a little clue of where the Fox reporter comes from on issues of religion, homosexuality, science, etc.

“There is a disturbing trend in the country where Muslim students are being given accommodations that Christian students are not receiving.”

Disturbing! No, this is not just another round of Starnes picking nits and twisting stories to fulfill some belief in a nefarious plot among Muslims to overtake America through ho hum feel-good public school P.C.-ness. Move along, people.

His first example of this disturbing trend:

“Rocky Mountain High School in Fort Collins, Colorado, they had a cultural club in the school. They led the entire student body in the Pledge of Allegiance on Monday said entirely in Arabic. And that included a portion of the pledge where we normally say in English, ‘One nation under God.’ Instead of ‘God,’ they used the word ‘Allah.’ They say they were doing this not to promote the Muslim Brotherhood or the Islamic faith but as an effort to be culturally diverse.”

The horror! They used the word Allah! Which… umm… is literally the Arabic word for “God.” Just like the Jews would say “Adonai” or “Hashem” in Hebrew. Ugh… languages and stuff.

Also hilarious is the fact that he actually threw in the consideration that the cultural club could have ever thought to do this to “promote the Muslim Brotherhood.” I guess you never know with those 14-to-17-year-old Honor students and their dedication to the teachings of Hasan al-Banna.

Starnes also forgot to note that this insidious Sharia-loving club has also performed the pledge in French (remember when they were enemy number one?) and Spanish. Also: did you know the Pledge of Allegiance was written by a self-described SOCIALIST?!?!

But such nuance is not an important factor in Starnes’ quest to eradicate the Muslim plot, and so he took to FoxNews.com with the perfectly reasonable headline: “School Recites Pledge in Arabic, One Nation Under Allah?”

Moving along to Starnes’ next discovery in the Plot to Destroy America:

Or… maybe that school district is experiencing a demographic shift, resulting in more Islamic students and thus, perhaps, the demand for accommodations similar to how the district gives everyone off for the Jewish holiday Rosh Hashanah and the Christian holiday Good Friday? Or… let’s just go with “this is another plot to destroy America and replace the Constitution with Sharia law.”

Furthermore, kudos to Starnes for twisting this story to fit his narrative. Yes, Skokie District 68 has added Eid ul Adha as a day off, but it didn’t “drop” Veterans Day to accommodate that. As some districts might do, Veterans Day is being used for “Teachers Institute Day,” which is the common practice of having teachers gather for a workshop of sorts. The kids still get off.

You could blame some treacherous Muslim plot for this egregious shake-up… or you could just whine to the State of Illinois, which gives local districts permission to schedule “Teachers Institute Days” on Veterans Day, Presidents Day and Casimir Pulaski Day.

Another story in Starnes’ bank of fear:

“[A district in Massachusetts took] middle school students to a mosque for an architectural observation and tour. Instead, when they got there they separated the boys and girls. They took the boys to do Muslim prayers and the girls were set aside and had their own private discussions. The school later apologized and said, ‘Oops, sorry.’ But we’re hearing a lot of these apologies after the fact.”

Okay, that does seem like a boneheaded mistake sure to offend some people. Outrage happened just as it would if the students were taken to a church and asked to perform the eucharist.

But wait a second: if we want our children to be especially vigilant for when the Muslim plot takes hold, wouldn’t we want them to have knowledge of the prayer practices? You know, to blend in until Christian revolution forces fight back?

And then there were more horror stories:

“A teacher, a member of the Gideons, a child asked for a copy of the Bible. The teacher gave him a copy. The teacher was fired just a few weeks ago. What’s interesting, in Russia you can give kids bibles in schools. Here in the United States, teachers can’t do that anymore.”

Yeah! I bet you can’t find a single instance of an American teacher giving their student a Bible anymore. According to reports, the teacher broke two of the NJ districts’ needlessly ridiculous rules: one that prohibits employees from distributing religious literature on school grounds; and another that requires educators remain neutral while discussing religious materials.

In other words, this wasn’t part of some ongoing WAR ON CHRISTIANITY; it was part of what’s known as “public school bureaucracy is ugly.” Silly rules like these are not a reason to fear some religious war, but rather, a great reason to argue for more school choice, so as to give parents the opportunity to find schools that match their values.

“A little girl wrote a Veterans Day poem in honor of her grandfather who served in the war. She had a passing reference to God. The school district ordered her to remove that word.”

Yeah, this one is pretty indefensible. But one can’t help but wonder: if that child were Muslim and the poem were about a father in the military who loves his dogs and “Allah,” would Starnes be so quick to defend the child? Who knows.

But again, the solution to this problem — which no one ever mentions — would be to allow more “school choice,” but I digress. Let’s just chalk this up to “schools making accommodations for Muslims where they wouldn’t for Christians,” as Starnes would have it.

Hide your Bibles quickly, and then watch the segment below, via Fox: