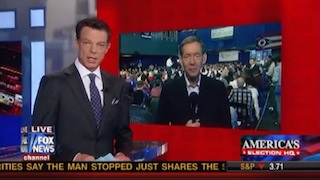 It is the job of every newscaster to delve deeper, to find the important angles of every story that someone might have missed. Tiny details might seem trivial, but a good journalist knows that even the most incidental of leads might culminate in a huge break. That’s why we have to be thankful for Fox News’ Shepard Smith, whose watchful eye managed to catch the most important aspect of an appearance Mitt Romney was giving in Ohio; the candidate was giving his speech while wearing “mom jeans.”

Seriously, this may be one of the most goofily entertaining things we’ve seen on TV this week. Smith was talking to Carl Cameron who was giving a report live from a rally with Romney himself seen talking in the background. While Cameron was attempting to talk about the repercussions of yesterday’s primaries, Smith was way more interested in talking about Romney’s sartorial choices. Cameron made a valiant (and hilarious to watch) effort to change the subject back but Smith kept interjecting, yelling out, “They’re mom jeans! This is 2012! Someone should tell him!”

Obviously, Smith was very tickled by the whole thing (is there anything more amusing than the moments when Shep is clearly only trying to entertain himself?). Even after the segment ended, he was still talking about it, throwing to commercial by telling viewers “It’s Mom Jeans Day! Join the trend!”

I guess Romney wants to tell the world that he’s not a woman anymore, he’s a candidate!

Watch the clip from Fox News below (wait until the end for the final moms jeans goodness):