Hilary Rosen Defends Her Ann Romney Comment: ‘I Love Stay At Home Moms’ And ‘This Is Not About Ann Romney’ 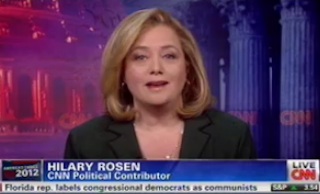 Democratic strategist Hilary Rosen appeared on CNN’s Newsroom Thursday to address the firestorm over her comments to Anderson Cooper that Ann Romney “actually never worked a day in her life.” Carol Costello held Rosen’s feet to the fire over the controversy her comments caused. “You know what you’ve done, Hilary, right?” Costello asked. “You stirred up the war between working moms and stay at home moms. Now that’s what we’re talking about.”

“Well, but this really isn’t about stay at home moms versus working moms. It’s about women in general. I love stay at home moms. I have nothing against them. I support them all the time. Go to CNN.com to see everything I have said about working moms. What the good conversation here is — is does Mitt Romney have a record about women and a plan for women that helps working women and women struggling economically to find a better future? That’s the challenge that I have for Mitt Romney.”

“But that’s not how people took your comments,” Costello asked. “They said it was offensive and that you were attacking stay-at-home moms. I mean, you said Ann Romney never worked a day in her life. This is a woman that suffered breast cancer, and has MS, she raised five boys. That’s hard work.”

“Look, I have kids. Being a mom is the hardest job in the world. That’s the truth of it,” countered Rosen. “I have said consistently that the –look, Mitt Romney has brought his wife into this conversation. This is not about Ann Romney. This is about the waitress at a diner in some place in Nevada who has two kids whose day care funding is being cut off because of the Romney/Ryan budget and she doesn’t know what to do. This isn’t about whether Ann Romney or I or other women of some means can afford to make a choice to stay home and raise kids. Most women in America, let’s face it, don’t have that choice. They have to be working moms and home moms and that’s the piece that I am not hearing from the Romney camp. Instead everybody is attacking me. That’s fine, attack me. But it does not erase his woeful record on this issue.”

“I don’t think that women across this country who have to work to support their families and raise their children look the divide [as] between liberal women and conservative women,” Rosen said. “Women see themselves as having a tough time and wanting leaders to speak to their issues. Barack Obama has done that. Mitt Romney has not. And the Republicans are making a very effective strategic decision today to attack me instead of talking about the issues that have been raised over the last few days.”

Watch Rosen defend herself below via CNN: