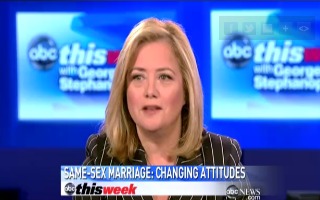 On ABC’s This Week with George Stephanopoulos on Sunday, Republican strategist Mary Matalin said that she believed that it was appropriate for society to have a conversation on the definition of marriage. She said it is a conversation worth having and “worth having civilly.” Democratic strategist Hilary Rosen responded by saying that “straight people don’t need any help tearing down the institution of marriage.”

“I think if the President really was bold, he would urge tolerance for the advocates – of the views of advocates, for either religious reasons or traditional reasons, support a multi-millennial, traditional definition of marriage,” said Matalin. “It’s about our entire culture. Where are we, and the disintegration of families. Those are conversations worth having – worth having civilly and worth hearing each other’s views.”

Matalin addressed Rosen, who is a lesbian parent, saying “I don’t think Hilary loves her children any less or any differently.”

“I think the other side has to be – and the President should urge – a tolerance of views of people who hold this, instead of calling them right-wing extremists,” Matalin concluded.

Stephanopoulos interrupted, saying that President Obama was urging tolerance of opposing views on marriage when he emphasized in the interview with ABC that gay marriage should be an issue reserved for the states.

“Sorry, but straight people don’t need any help tearing down the institution of marriage,” Rosen said. “You’re doing just fine as it is. One in three divorces, come on. The irony is that really gay people are looking to do the most conservative thing. They want to fight in the armed forces, they want to protect our country. And they want to join the institution of marriage, loving commitment couples raising children.”