Hilary Rosen Tells CNN She ‘Hates’ The War On Women: ‘It’s Got Such Terrible Energy’
video

Hilary Rosen Tells CNN She ‘Hates’ The War On Women: ‘It’s Got Such Terrible Energy’ 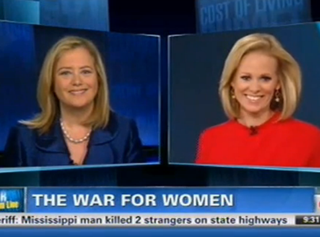 Hilary Rosen, whose profile as a pundit was raised perhaps the highest of any other during the peak of the “War on Women” contraception and motherhood debate, told CNN today that she “hated” the term “War on Women” and found the concept “disturbing.” Rosen, on a panel to debate women as a political constituency with Margaret Hoover and host Christine Romans, explained that it did not make sense to “think of women as a constituency– we are the majority,” and she and Hoover agreed that, as far as the economy goes, women are just as much at its mercy as men.

Hoover argued that the “War on Women” was an attempt by Democrats to acquire more women voters because “they are losing men,” though Rosen disagreed that it was wise to see women as a constituency affected by issues in a particular way. “I hate this word, ‘War on Women,'” she said, to which Hoover agreed– “it’s so political and terrible.” “Such a bad vibe, and it’s got such terrible energy, and it’s really disturbing,” she argued.

At the end of the day, concluded Romans, “people want to know who is going to create a job for them in the future,” a point that Hoover noted affected “women no differently than effect men.” Hoover and Rosen disagreed on the enthusiasm levels of the Republican Party (though both thought Democrats were somewhat discouraged), and Romans noted, as Rosen argued that we have had as a country “26 straight months of job growth,” that it has also been some of the slowest job growth in history. Romans concluded it would depend on “whose message people believe” on the economy, with both presenting formidable arguments.