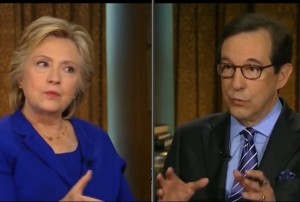 Former Secretary of State and current Democratic presidential nominee Hillary Clinton took to Fox News Sunday for her first post-convention interview, and after host Chris Wallace made Secretary Clinton feel right at home by grilling her about Benghazi, he segued into a chunk of questions about the now-completed investigation into Clinton’s emails, which revealed no criminal wrongdoing.

Wallace confronted Hillary with bits of FBI Director James Comey‘s testimony before Congress, and suggested that he contradicted many of her claims. Hillary saw it somewhat differently:

Chris, that’s not what I heard Director Comey say, and I thank you for giving me the opportunity, in my view, to clarify. Director Comey said my answers were truthful, and what I’ve said is consistent with what i have told the American people, that there were decisions discussed and made to classify retroactively certain of the e-mails. I was communicating with over 300 people in my e-mailing. They certainly did not believe and had no reason to believe that what they were sending was classified. In retrospect, different agencies come in and say, well, it should have been, but that’s not what was happening in real time.

In fact, what Comey also said, and which Wallace failed to mention, was that none of Clinton;’s emails were properly marked classified, and that a person with expertise would have reasonanly inferred that they were not marked classified:

Rep. Matt Cartwright: were these properly documented, were they properly marked according to the manual with the little “cs”?

FBI Director James Comey: no…There were three e-mails. Yhe “c” was in the body, in the text but there was no header on the e-mail or the text.

Rep. Matt Cartwright: So if Secretary Clinton really were an expert at what’s classified and what’s not classified, and were following the manual, the absence of a header would tell her immediately that those three documents were not classified. Am I correct in that?

FBI Director James Comey: That would be a reasonable inference.