Hillary Clinton Brushes Bernie Sanders Off With Most Dismissive Chuckle Ever 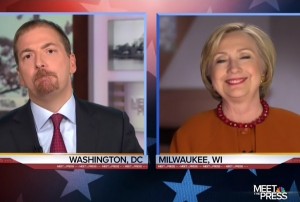 Former Secretary of State and current Democratic presidential frontrunner Hillary Clinton went on the counterattack Sunday, after facing intense attacks from Sen. Bernie Sanders and his supporters over her supposed ties to the fossil fuel industry, the currently unwinding email “scandal,” and more attacks on the paid speeches she gave to Wall Street companies. In an interview with Meet the Press moderator Chuck Todd, she hit back at the fossil fuel attacks that have been largely debunked by fact-checkers, but there was another, more compelling moment from that interview.

Chuck Todd asked Hillary to respond to renewed attacks on her Wall Street speeches, but it was while introducing the topic that Hillary Clinton showed a brilliant flash of realness by anticipating the Sanders attack with a chuckle so dismissive, the dirt brushed itself off of her shoulder:

Well, what I have said before, I will say again. I’ve heard him say that. And you know, look, I think what he’s trying to imply, and I know his campaign tries to imply this, is undermining or, again, misrepresenting my record when it comes to being tough on Wall Street. I have a record, Chuck.

It is out there in the public. And I’m the only candidate in the Democratic primary, or actually on either side, who Wall Street financiers and hedge fund managers are actually running ads against. So I find this, again, a kind of, you know, circuitous way to raise questions about my record.

But I’m very proud of the fact that I have the most comprehensive approach towards taking on the problems that exist in the economy. I don’t just talk about breaking up the banks, because we now have the authority, thanks to President Obama, under Dodd-Frank. I talk about taking the other risks on, like the hedge funds and everybody else.

The substance of Hillary’s reply was about as good as could be expected, and much better than her disingenuous demand that everyone else release their transcript, too, but what was great about that moment was its authenticity. It’s something that has been on display a number of times these past few days, and the reactions to it have been fascinating. Hillary’s critics are going to criticize her no matter what, but her taking-no-shit attitude has drawn out a certain type of criticism that belies a double-standard for female politicians who get tough. On the other hand, Hillary’s supporters love it, as you might expect they would.

The real question, then, is whether or not it helps with everyone else. I can’t answer that with any certainty, because she doesn’t do it nearly often enough, but what I can say for certain is that the cautious Hillary, who often weirdly boasts (as she did here) that she has said the exact same thing over and over again, is definitely not of help to her. It’s the most trite political truism of the last decade or so, but in this case, it’s right on the money: Let Hillary be Hillary.