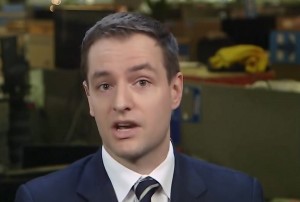 Republican presidential nominee Donald Trump sought to allay concerns about his possible ties with Russia this week by parting ways with campaign manager Paul Manafort, but Hillary Clinton‘s campaign is not letting go of the issue that easily. On Sunday morning’s This Week with George Stephanopoulos, Clinton campaign manager Robbie Mook pressed the issue hard with host George Stephanopoulos, while also blasting Trump for hiring Stephen Bannon from the alt-right Brietbart.com to be his campaign CEO:

STEPHANOPOULOS: you heard Kellyanne Conway say, no, we are seeing a different Donald Trump. Best week of the campaign in the last week. And he’s reinforcing that with new policies while Hillary Clinton promises more of the same.

ROBBY MOOK: Well, George, we’re not seeing a pivot. Donald Trump himself said this was not a pivot. He wants to double down on letting Donald Trump be Donald Trump, that’s why he’s brought in to run his campaign someone who wrote — or ran a so-called news organization, Breitbart News, which has peddled some of the worst conspiracy theories around. They’ve run news, quote unquote “news,” that’s defended white supremacists, that’s been sexist, racist, the worst of our politics. So, I think we should be very concerned. I would also point out that Paul Manafort has been pushed out, but that doesn’t mean that the Russians have been pushed out of this campaign. The hand of the Kremlin has been at work in this campaign for some time. It’s clear that they are supporting Donald Trump. But we now need Donald Trump to explain to us the extent to which the hand of the Kremlin is at the core of his own campaign. There’s a web of financial interests that have not been disclosed. And there are real questions being raised about whether Donald Trump himself is just a puppet for the Kremlin in this race?

STEPHANOPOULOS: You’re saying he’s a puppet for the Kremlin?

MOOK: Well, real questions are being raised about that. We — again, there’s a web of financial
ties to the Russians that he refuses to disclose. We’ve seen over the last few week, him parroted Vladimir Putin in his own remarks. We saw the Republican Party platform changed. She saw Donald Trump talk about leaving NATO and leaving our Eastern European allies vulnerable to a Russian attack. The gentleman he brought with him to his security briefing just last week is someone who’s on the payroll of the Russia Times, which is a basically a propaganda arm of the Kremlin. He was sitting two seats away from Vladimir Putin at heir 10th Anniversary gala. There are a lot of questions here. And we need Donald Trump to disclose all of his financial ties and whether his advisers are having meetings with the Kremlin.

Many of Trump’s critics have pointed out that even with Manafort’s ouster, there remains a heavy Russian influence within Trump’s campaign.