Hillary Clinton: ‘America Is Losing’ An Information War That ‘Al Jazeera Is Winning’ 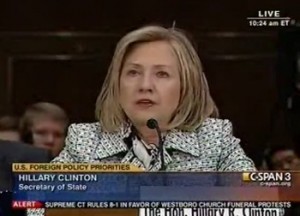 Secretary of State Hillary Clinton appeared before a U.S. Foreign Policy Priorities committee this morning and was asked by Senator Richard Lugar (R-IN) to opine on U.S. diplomatic communication efforts, specifically regarding broadcast media. Clinton did not mince words, claiming that the U.S. is in an “information war and we are losing that war,” and later adding that “Al Jazeera is winning.” The Secretary of state also appeared to make a case for public broadcasting by averring that “our private media cannot fill that gap.”

“Let’s talk straight realpolitik,” Clinton said. “We are in a huge competition” for global influence and global markets. She described countries circling around huge new oil discoveries in the south Pacific. “China is there every day, figuring out how they’re going to come in behind us, come in under us,” she said.

She also said the U.S. had to do more to communicate its values and spread its influence to the rest of the world through government-backed media, such as Al-Hurrah Television, which broadcasts in the Arab world.

“We are engaged in an information war and we are losing that war,” she said. China and Russia have started multi- language television networks, she said, even as the U.S. cuts back in this area. “We are paying a big price” for dismantling international communications networks after the end of the Cold War, Clinton said.

During the recent upheaval in Egypt that led to the shocking resignation of Hosni Mubarak, American’s interested in following the most comprehensive coverage of the incredibly fluid story were left only to watch the online streaming broadcast of Al Jazeera English. This brought a chorus of concerned media critics reasonably clamoring for U.S. cable carriers to provide Al Jazeera English, instead of, say, a fifth Home Shopping Network.

But the stakes are considerably higher when the individual in charge of U.S. diplomatic affairs is saying that our private media entities are effectively getting their asses handed to them by our foreign competitors, though to be fair, its not the role of private media to take a stake in U.S. diplomatic efforts.

Watch the clip embedded below courtesy of C-Span: