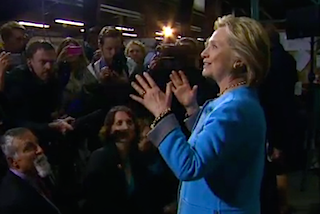 During a campaign stop in New Hampshire on Monday, Hillary Clinton actually took a few questions from the press, addressing her conservative critics in a more direct way than she had previously done in her still-nascent run for president.

In response to attacks like those found in Peter Schweizer’s new book, Clinton Cash

, about foreign donations to the Clinton Foundation, the candidate said they were no more than “distractions” from the important issues facing Americans.

“It’s worth noting Republicans seem to be talking only about me and I don’t know what they’d talk about if I weren’t in the race,” Clinton said in a brief press conference. “We’re back into the political season therefore we will be subjected to all kinds of distraction and attacks and I’m ready for that.”

Earlier, at another round table event, Clinton took some shots at potential GOP rivals like Jeb Bush and Chris Christie, who have proposed cuts to Social Security. “My only question to everybody who thinks we can privatize Social Security or undermine it in some way is, so then what’s going to happen to all these people like you who worked 27 years at this other company? What’s going to happen?” she asked. “It’s just wrong.”

The latest CNN/ORC poll shows that Clinton is still far out in front of the Republican field on a national scale. Sen. Marco Rubio (R-FL) comes closer to her than any other candidate, but still trails Clinton by 14 points, 55% to 41%.