Hillary Clinton: MH17 ‘Probably Had to Be’ Work of Russian Insurgents 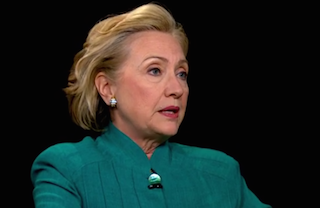 Charlie Rose taped a well-timed interview with Hillary Clinton Thursday, set to air on his eponymous PBS show tonight. But ahead of that broadcast, the show has released an excerpt featuring the former secretary of state’s initial reaction to the Malaysia Airlines passenger jet that crashed in Eastern Ukraine earlier today.

“The questions I’d be asking,” Clinton said in the interview, “is who could have shot it down, who had the equipment — it’s obviously an anti-aircraft missile. Who had the expertise to do that?”

She noted that the Ukrainian government has been quick to blame the crash on “terrorists,” which is “their name for the Russian insurgents.” Clinton agreed that it “probably had to be” Russian insurgents that brought the plane down, but would need forensic evidence to determine that for sure.

“If there is evidence pointing in that direction, the equipment had to come from Russia,” Clinton continued. “There is a great deal of concern that, not only was a civilian plane shot down, but what this means about the continuing conflict in Eastern Ukraine and the role that Russia is playing.”

If those assumptions turn out to be true, Clinton said it would be Europe’s responsibility to join the U.S. in imposing stronger sanctions against Russia and supporting the Ukrainians. They must say, “Putin has gone too far and we are not going stand idly by,” she said. “There should outrage in European capitals.”