Hillary Clinton on Bernie Sanders: ‘I Have No Interest’ In Attacking Him
video

Hillary Clinton on Bernie Sanders: ‘I Have No Interest’ In Attacking Him 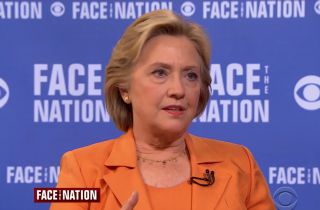 Democratic presidential frontrunner Hillary Clinton said on Sunday morning that she has “no interest” in attacking Democratic rival Bernie Sanders, even as the Vermont senator continues to cut into Clinton’s lead nationally and in key early primary states.

Sanders has been reluctant to attack Clinton, even when given the opportunity to do so, insisting that journalists should stick to the issues rather than the typical mud-slinging that comes with every presidential election season.

On Face the Nation Sunday morning, host John Dickerson asked Clinton if she would pledge to not attack Sanders, and would encourage her supporters not to do so as well.

“Look, I want this to be about ideas and about policies,” Clinton said. “I know Bernie. I respect his enthusiastic and intense advocacy of his ideas. That’s what I want this campaign to be about, and I hope people who support me respect that.”

Pressed further by Dickerson, Clinton said she has “no interest” in attacking Sanders or running negative advertisements against him.

Those remarks come at a time when Clinton’s poll numbers are continuing to fall, while Sanders has surged past her in a number of polls in Iowa and New Hampshire. Still, Clinton’s campaign believes that it can secure the Democratic nomination even if the former secretary of state loses to Sanders in those two states. Sanders recently said he believes the Clinton campaign is “getting nervous” about his rise.