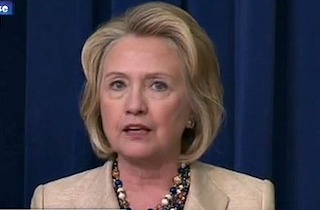 In her first public comments on the crisis since President Barack Obama proposed military action in response to Syria’s use of chemical weapons, former Secretary of State Hillary Clinton called the Russian offer to remove Syrian President Bashar al-Assad’s weapons an “important step,” but warned that Russia must demonstrate its sincerity to the international community.

“If the regime immediately surrendered its stockpiles to international control, as was suggested by Secretary [John] Kerry and the Russians, that would be an important step,” Clinton said. “But this cannot be another excuse for delay or obstruction. Russia has to support the international community’s efforts sincerely, or be held to account.”

Clinton also defended Obama’s push for strikes as instrumental in making such a political settlement possible.

“It is very important to note that this discussion that has taken hold today, about potential international control over Syria’s stockpiles, only could take place in the context of a credible military threat by the United States to keep pressure on the Syrian government as well as those supporting Syria, like Russia,” she said.

“Achieving a political solution that ends the conflict is in the interest of the United States,” Clinton concluded. “It will require an intense diplomatic effort, guided by the road map that was agreed to by the international community in Geneva, last year, in June of 2012. There was an agreement we hammered out that pointed the way forward. We need to get to the opportunity to begin such negotiations to move toward a resolution.”