Hillary Clinton Strongly Condemns Attacks On Libyan Embassy: ‘There Is No Justification For This’
video

Hillary Clinton Strongly Condemns Attacks On Libyan Embassy: ‘There Is No Justification For This’ 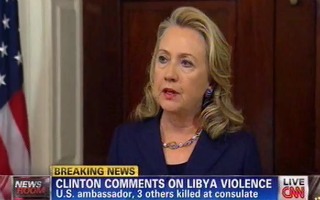 On Wednesday, U.S. Secretary of State Hillary Clinton addressed the attacks on America’s embassy in Libya on September 11, in which four American service personnel were killed including the American ambassador.

Clinton began by outlining the details of the attack, which included armed militants storming the American mission in Benghazi, Libya.

She named the Americans killed in the attack, including America’s Ambassador to Libya Chris Stevens.

“This is an attack that should shock the conscience of people of all faiths around the world,” said Clinton. “We condemn in the strongest terms this senseless act of violence and we send our prayers to the families, friends and colleagues of those we’ve lost.”

Clinton said that American diplomats are in danger every day in the service of “our country and our values.” She eulogized Stevens, who spent much of his career working to advance American interests in North Africa.

“This question reflects just how complicated, and at times how confounding, the world can be,” Clinton continued. “But we must be clear-eyed even in our grief. This was an attack by a small and savage group — not the people or government of Libya.”

She said that the people of Libya are overwhelmingly supportive of the United States which helped liberate the country from the rule of Muammar Gadhafi in 2011. S

“A free and stable Libya is still in America’s interest and security, and we will not turn our back on that,” Clinton concluded.

Some have sought t justify this vicious behavior, along with the protest that took place at our embassy in Cairo yesterday, as a response to inflammatory material posted on the internet. America’s commitment to religious tolerance goes back to the very beginning of our nation, but let me be clear: there is no justification for this. None. Violence like this is no way to honor religion or faith. And as long gas there are those who would take innocent life in the name of God, the world will never know a true and lasting peace.

Watch the press conference below via CNN: