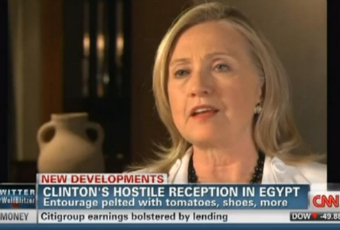 Secretary of State Hillary Clinton sat down in Jerusalem Monday afternoon with CNN’s Elise Labott to discuss her hostile reception in Egypt, the ongoing strife in Syria, and the recent Mitt Romney campaign ad that repurposes her own 2008 words for an attack on President Barack Obama.

When asked about her hostile welcome upon visiting Egypt, in which bottles and tomatoes were thrown at her caravan while protestors shouted “Monica, Monica!” in reference to husband’s sexual affairs, Clinton chalked it up to “a lot of uncertainty and anxiety in Egypt right now. They’re doing something they’ve never done in 5,000-plus years of history. They’ve had elections, they’ve elected a president, but they still don’t have a government.”

“I knew very well there would be a lot of passion and conviction expressed,” she continued, “which i think demonstrates how invested Egyptians are in trying to make sure their democratic transition works out for the benefit of all the Egyptians — men and women, Muslim and Christian, everybody.”

When pressed on whether she’d like to use U.S. aid to ensure that transition happens, Clinton responded that “until there’s a government in place, until there’s a finance minister and a prime minister — people with whom we can talk specifics — we won’t be able to know exactly what we can offer or… what kind of accountability to seek.”

Labott then challenged Clinton on the situation in Syria: “A year ago when you were in Lithuania, you said time was running out for the [President Bashar al] Assad regime. There were 1,000 people dead. When you were in Tokyo, you said the sands were coming out of the hourglass. Now there are 10,000 people are dead. What is the threshold, Madame Secretary, that these don’t become empty words and there will be an intervention to get rid of President Assad?”

“We are trying to intervene,” Clinton responded. “We’re trying to intervene in a way that brings about an end to the violence, and a transition to a democratic future, that doesn’t require adding to the violence, further militarizing the conflict, perhaps killing more people and pushing them across the borders. I think everybody is very wary, for good reason, of that kind of intervention.”

Clinton added that she has tried to get other skeptical nations on board with the United States, particularly Russia and China, and has worked to reassure that humanitarian assistance is provided to neighboring countries that have absorbed Syrian refugees.

“Everybody is as outraged as I am, for very good reason, at what we see happening. It’s horrific what’s happening,” Secretary Clinton added, but then restated her hesitance to use military force: “You have to look at all the consequences of any action that the outside could take. And there are many instances that I could point to where you could make things worse, you could add to the violence through some kind of military intervention.”

“The regime is not going to survive,” she concluded. “I wish it would end sooner instead of later.”

I am out of politics, and I haven’t seen any of the ads that you’re talking about. But I have to say: I think it’s a waste of money. Everybody knows I ran against President Obama in 2008 — that’s hardly news. Everybody knows we ran a hard-fought campaign, and he won. And I’ve been honored to serve as his Secretary of State, working with him to advance America’s interest, values, and securities.

Check out the interview below, via CNN: