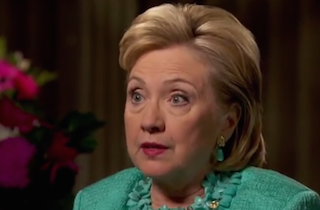 As the debate rages on over the revived crisis in Iraq, Hillary Clinton weighed in on the issue Monday night during an interview with CBC’s Peter Mansbridge. While President Barack Obama has authorized the deployment of 275 troops to Iraq, Clinton said she would “absolutely not” put ground troops in if she were president.

When Mansbridge asked if she would “only” use airstrikes, Clinton replied, “Well, not even that necessarily.” She explained, “I would not support any action unless there was a very clear understand of what [Iraqi President Nouri al-]Maliki would or wouldn’t do, who was running the army and what third parties were going to be involved.”

Asked if Maliki “has to go,” Clinton pointed out that he and his party was just re-elected. At the same time, she said she “would not support any effort by the United States to back up [Maliki’s] government, unless the conditions that we have been asking for for a number of years were finally met.”

Earlier in the day, Clinton confronted her past positions on Iraq during a forum event in Toronto. In her new book, Hard Choices

During the Q&A session, Clinton explained that she could have done what many other Democrats in her position did in the following years and blame the Bush administration for misleading them into voting for the war. Instead, she said, “I kept temporizing and I kept avoiding saying it because I didn’t want there to be any feeling that I was backing off or undercutting my support for this very difficult mission in Iraq.”

Watch video below, via CBC: