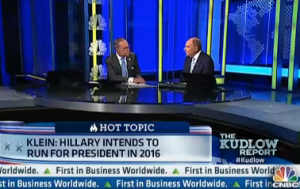 The prospect of an Obama/Biden ticket morphing into an Obama/Clinton ticket has been getting a bit of attention this week, spurred back to life by Vice President Joe Biden‘s controversial “chains” remark. For those rooting for the switcheroo, author Ed Klein has some bad news. During a segment with CNBC’s Larry Kudlow, Klein said he was told Secretary of State Hillary Clinton turned down the possibility “a couple of weeks ago.”

Citing his “sources in the Clinton camp,” Klein, author of The Amateur: Barack Obama in the White House, told Kudlow that the White House had been pondering the change:

Until just a couple of weeks ago, the White House was putting out feelers to see if Hillary would accept the vice presidential nod and replace Joe Biden. Bill Clinton was, I’m told, urging his wife to accept the number two slot. He saw this as a great launching pad for her for running in 2016. But then Hillary had lunch in the White House a couple of weeks ago with Valerie Jarrett, Michelle’s best friend, senior adviser to both the first lady and the president.

“Just about the biggest lefty in the White House,” Kudlow noted.

Klein added, “That’s right. She told Valerie she would not accept the vice president spot.” He went on:

The lunch was ostensibly about other matters, but it came up. The vice presidential thing came up. Hillary felt burned out after four years as secretary of state. But I’m told there were more important reasons for her not accepting.

So, the White House wanted to ditch ole’ Joe and considered offering Hillary his spot — but despite Bill’s encouragement, but she turned it down because she didn’t want to be associated with a far left-wing, socialistic loser, in the interest of her own future presidential run?

If anyone else has an inside scoop, now’s the time.

Take a look at the segment, via CNBC: