Hillary Clinton Used an iPad for Email Too, Despite ‘Single Device’ Explanation

Hillary Clinton Used an iPad for Email Too, Despite ‘Single Device’ Explanation 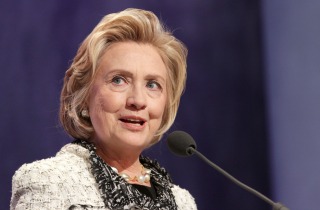 Despite claiming to have established a personal email server so that she only needed to carry one device, it turns out Hillary Clinton used both a Blackberry and an iPad for work correspondence during her tenure as Secretary of State.

This according to a new Associated Press report based on their 2013 Freedom of Information Act request for her emails about drone strikes and U.S. surveillance programs.

So what do the four emails sent to her private email address show? Per AP:

[…] Clinton, on at least one occasion, accidentally mingled personal and work matters. In reply to a message sent in September 2011 by adviser Huma Abedin to Clinton’s personal email account, which contained an AP story about a drone strike in Pakistan, Clinton mistakenly replied with questions that appear to be about decorations.

“I like the idea of these,” she wrote to Abedin. “How high are they? What would the bench be made of? And I’d prefer two shelves or attractive boxes/baskets/ conmtainers (sic) on one. What do you think?”

Abedin replied, “Did u mean to send to me?” To which Clinton wrote, “No-sorry! Also, pls let me know if you got a reply from my ipad. I’m not sure replies go thru.”

Clinton spokesman Nick Merrill told the AP this morning that the secretary used her iPad mostly to “read news clippings.”

Earlier this month, while addressing her email controversy at the United Nations, Clinton told reporters that her use of a private server as opposed to the government-run option was a matter of convenience. “I thought it would be easier to carry just one device for my work and for my personal emails instead of two,” she said at the time.