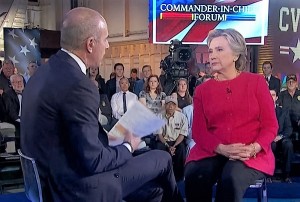 Over the past few days, much has been written and said about Wednesday night’s MSNBC “Commander-in-Chief Forum,” which ostensibly pitted former Secretary of State Hillary Clinton against Republican presidential nominee Donald Trump, but which, in reality, featured a much more daunting foe for the first woman nominee for president. Much of that analysis rightly scapegoats moderator Matt Lauer, who not only obsessed about the now-discredited “Emailgate” controversy, but by all accounts gave Donald Trump a free hand to lie, and utterly failed to challenge him on key areas.

It’s hard to know where to begin with Lauer, who not only allowed Trump to tell whopper after whopper without any attempt at pushing back, but failed to ask Trump about a host of clear liabilities in the subject matter area, such as his comment about not liking prisoners of war because they “got caught,” or his failure to release tax returns that would allow voters to determine whether he has compromising financial relationships with foreign entities, or his roiling and racist feud with the family of Captain Humayun Khan, or his ignorance of the nuclear triad, or his multitude of disturbing positions on NATO, et cetera, et cetera, et cetera. I could literally go on all day like this.

I realize Lauer had limited time, but at least four of Lauer’s questions were, essentially, variations on “Hey, do you really think you can be president, or what?”

One of the best analyses of why this is such a problem came from The New Yorker’s Jonathan Chait, who summed it up this way:

I had not taken seriously the possibility that Donald Trump could win the presidency until I saw Matt Lauer host an hour-long interview with the two major-party candidates. Lauer’s performance was not merely a failure, it was horrifying and shocking. The shock, for me, was the realization that most Americans inhabit a very different news environment than professional journalists. I not only consume a lot of news, since it’s my job, I also tend to focus on elite print-news sources. Most voters, and all the more so undecided voters, subsist on a news diet supplied by the likes of Matt Lauer. And the reality transmitted to them from Lauer matches the reality of the polls, which is a world in which Clinton and Trump are equivalently flawed.

Now, Lauer’s ineptitude aside, I do not think that he’s the main problem, although he’s an excellent test case for what we can expect in the debates. No, Hillary Clinton’s most dangerous foe is the entire political news media, whose idea of objectivity is, as Chait hints at, is to treat every liability as equal, at best, and to hunt for a liability when one is needed to provide “balance.” As latter-day prophet Mika Brzezinski keeps saying, political journalism is feeding a delusion.