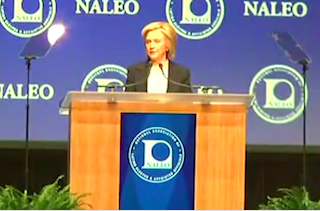 Speaking from the annual National Association of Latino Elected Officials conference in Las Vegas on Thursday, Hillary Clinton echoed the words of President Barack Obama by saying the mass shooting at a black church in Charleston, South Carolina means the country must face “hard truths about race, violence, guns and division.”

“The shock and pain of this crime of hate strikes deep,” Clinton said, alluding to the “hate crime” description employed by the Justice Department. “It just broke my heart,” she said, adding that a house of worship is “the last place we should ever see violence, but we shouldn’t see it anywhere.”

To the people of Charleston, Clinton said, “You do not walk alone, because millions of Americans, regardless of race or creed or ethnicity or religion are walking with you. In grief, in solidarity, in determination, we are with you. And we will stand with you as we seek answers and take action.”

“How many people do we need to see cut down before we act?” she asked.

Clinton spoke out against America’s current gun laws during a forum earlier this year, calling the current system “way out of balance.” She added, “We’ve got to rein in what has become almost an article of faith that almost anybody can have a gun anywhere at any time. And I don’t believe that is in the best interest of the vast majority of people.”