Hillary Hits Cheney for Obama Criticism: ‘Should’ve Been Talking About Himself’ 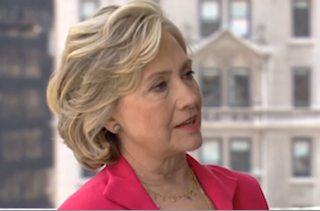 In another preview from her interview with Jorge Ramos, set to air tonight on Fusion, Hillary Clinton offered up a strong defense of President Barack Obama in the face of criticism from former Vice President Dick Cheney. In response to Cheney’s assertion about Obama that “rarely has a U.S. president been so wrong about so much at the expense of so many,” Clinton said, “He should’ve been talking about himself, shouldn’t he?”

“I don’t know why he’s saying what he’s saying, and clearly we don’t need that kind of vitriol and finger pointing,” Clinton continued. “One of the things we’ve lost over the last few years is that idea where we’re going to have our differences but when we face problems, whether they’re humanitarian problems, terrorist problems, whatever they might be, we need to come together and work together and we need to have a nonpartisan approach. And he keeps trying to inject a personal and partisan approach where it doesn’t belong.”

On the issue of Iraq, Clinton reiterated the regret she expresses in her book Hard Choices

. “I made a mistake,” she said, adding that she gave President George W. Bush “the benefit of the doubt in area where I should not have, and then the initial decision was wrong, and then the follow-up that they did inside Iraq made it even worse.”