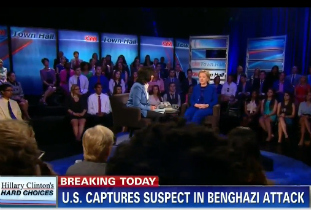 CNN’s much-hyped town hall event with Hillary Clinton began Tuesday with the breaking news regarding the arrest of Ahmed Abu Khattala in connection with the 2012 attack on the U.S. consulate in Benghazi, Libya. Moderator Christiane Amanpour asked Clinton to respond directly to Patricia Smith, the mother of Sean Smith, who was one of four American diplomats killed in the attack.

First, Clinton gave her reaction to the news of the arrest, saying she is “very pleased” that U.S. Special Forces were able to detain Khattala. She also echoed President Barack Obama in saying that the United States “has an unwavering commitment to bring to justice those who are responsible for attacks on Americans no matter where they are, no matter how long it takes.”

In regards to Smith, who earlier today told CNN that she is still not satisfied with the answers she has received from Obama, Clinton and others, the former secretary of state said, “I totally relate to her as a mother or to any of the family members of the four Americans who were killed that night. I can see why she and others are inconsolable.”

Clinton admitted that she is “still looking for answers” herself about the Benghazi attack “because it was a confusing and difficult time.” But, she added, “I would hope that every American would understand, number one, why we were there, because we need to be in dangerous places and number two, that we’re doing the best we can to find out what happened and I hope that fair-minded people will look at that seriously.”