Hillary Speaks on WDBJ Shooting: I Will Take on Gun Violence
VIDEO

Hillary Speaks on WDBJ Shooting: I Will Take on Gun Violence 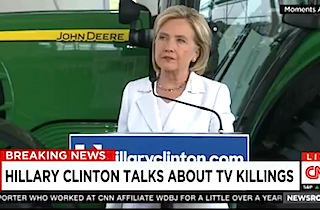 During a campaign press conference in Iowa on Wednesday, Hillary Clinton spoke about the deadly on-air shooting of a reporter and cameraman in Virginia and vowed to address the gun violence problem in America if she is elected president.

“First of all, I was so just stricken to think that these two young people doing the work that you guys do every single day would be murdered on live television,” Clinton began, speaking to members of the media. “And I will extend my condolences and sympathies to their families and to their co-workers and pray for the woman, who last I checked, was still in critical condition.

“But I will also reiterate we have got to do something about gun violence in America,” she continued. “And I will take it on. There are many people who face it and know it ,but then turn away because it’s hard. It’s a very political, difficult issue in America, but I believe we are smart enough, we are compassionate enough to figure out how to balance the legitimate Second Amendment rights with preventive measures and control measures so that whatever motivated this murderer, who eventually took his own life, we will not see more deaths — needless, senseless deaths. So, yes, I feel just great heartache at what happened and I want to reiterate how important it is we not let yet another terrible instance go by without trying to do something more to prevent this incredible killing that is stalking our country.”

Specifically, Clinton spoke of instituting “universal background checks,” saying, “if we could just put some time-out between the person who is upset because he got fired or the domestic abuse or whatever other motivation may be working on someone who does this, that maybe we could prevent this kind of carnage.”

Watch video below, via C-Span:

Earlier today, Clinton sent out a tweet with a similar message:

Heartbroken and angry. We must act to stop gun violence, and we cannot wait any longer. Praying for the victims' families in Virginia. -H

She is the only candidate to raise the issue of gun control in connection to the shooting. Her Republican rivals, and even some Democrats, sent their “prayers” to the victims, but did not indicate what they would do to prevent such shootings from happening in the future:

My prayers go out to the @WDBJ7 family and their tragic loss this morning.

All of our thoughts and prayers are with the family, friends, and loved ones of @WDBJ7’s Alison and Adam.

Janet & I are heartbroken by the deaths of @WDBJ7 journalists Alison Parker & Adam Ward. Praying for everyone affected by this tragedy.

My thoughts and prayers are with the victims, their families, and #WDBJ7. Absolutely heartbreaking.

Senseless. Awful. My thoughts are with the entire @WDBJ7 family. -O'M https://t.co/0LSdthgKE7

Tragic loss of @dowork88 and @AParkerWDBJ7 this morning. Our prayers go out to their friends, family and the entire news crew. – SW

Shocked by the horrific murders in Roanoke. Columba and I are praying for Alison, Adam and all those affected.

My thoughts and prayers go out to the three victims of this senseless tragedy, as well as to their families and friends. #WDBJ

Saddened by the deadly shooting in Virginia this morning. My thoughts and prayers are with the family and friends of the victims.

My thoughts & prayers go out to Roanoke & the families and friends of the victims of this senseless violent act. -John