Hillary Spox on Email: 'She Didn't Really Think it Through'
video

Hillary Spox on Private Email Use: ‘She Didn’t Really Think It Through’ 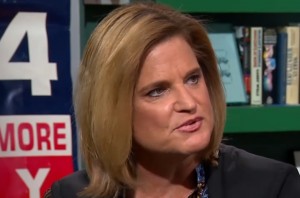 Hillary Clinton’s communications director Jennifer Palmieri got in a heated discussion with Bloomberg Politics’ John Heilemann over the candidate’s use of private email, eventually just admitting “she didn’t really think it through.”

“She had a server in her house–” the host of With All Due Respect began.

“Because her house had a former president,” Palmieri cut in.

“I’ve encountered this a lot in politics where people think that the answer is a lot more complicated than it really is,” Palmieri said. “She’s answered this many times and she did have her own e-mail account. Others had done it before and it was just more convenient and she kept it like that, and she didn’t really—that’s the thing, she didn’t really think it through. She has said, had she, she would have done it differently.”

Watch below, via Bloomberg: