Hillary Talks Email, Kanye, Amy Schumer and Does the Whip/Nae Nae with Ellen 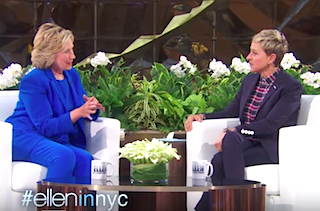 The concerted effort to humanize Hillary Clinton made its way to The Ellen DeGeneres Show on Thursday, where the Democratic frontrunner joked about Kanye West’s 2020 presidential campaign and continued to apologize for her use of a private email server as Secretary of State.

“I heard him make the announcement, and he said he wanted to run in 2020,” Clinton said of West’s MTV VMA speech. “I would only ask him, if I’m running for reelection, to wait.”

DeGeneres stopped just short of officially endorsing Clinton during the interview, saying she wants someone who’s “qualified” and when she looks at all the candidates running, she wants a president who is “for equal rights across the board, equal rights for women, for every ethnicity, equal rights for everyone — The only person I can look at is you.”

Later, the host asked Clinton how she reacts to people who point out she would be one of the oldest presidents ever elected, adding, “Don’t we want experience more than anything?”

“The way I look at it,” Clinton answered, “I would be the youngest woman ever elected president.”

DeGeneres did touch on the email issue, but instead of pressing Clinton, she merely gave her an opportunity to repeat the apology she gave to ABC’s David Muir earlier this week.

“Well, I want people to understand this, so I am glad you asked,” Clinton said when the issue came up. “I used a personal email account, I was allowed by the State Department. But I should have used two different accounts. I made a mistake and I am sorry for all the confusion that has ensued. I take responsibly for that.”

Then, at one point during the interview, Amy Schumer came out on roller skates to interrupt the conversation. “I love that fact that she’s going after gun violence,” Clinton said of the comedian’s new cause.