Hillary Throws Shade at Fox’s Ed Henry: You Are ‘Entitled’ to 1 Question
VIDEO

Hillary Throws Shade at Fox’s Ed Henry: You Are ‘Entitled’ to 1 Question 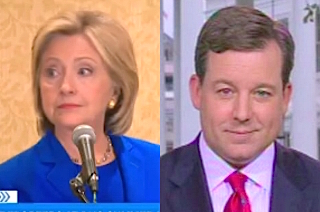 Hillary Clinton’s contentious history with Fox News’ Ed Henry got another chapter on Friday when the reporter attempted to ask her multiple questions during a press conference at the DNC’s summer meeting in Minneapolis. “I wonder if you could answer a couple of questions,” he said, as the Democratic candidate gave a slight eye roll to the crowd.

“Let me answer one of your questions,” Clinton said in response, “because I think that’s what you’re entitled to.” She opted to answer Henry’s first question about her husband Bill Clinton’s paid speeches and ignore his follow-up about her private email server.

Going back months, Henry has been extremely critical of Clinton’s reluctance to answer questions from the national media, and has been denied that opportunity by the candidate on multiple occasions since she announced her campaign. They finally had a substantive back and forth about the email controversy during a town hall event in Las Vegas last week that ended with a shrug from Clinton.

Just today, in a piece with headline, “The Fox News Thorn in Hillary’s Side,” The Daily Beast’s Lloyd Grove spoke to Henry about his relentless pursuit. “It sounds goofy, but it’s not just for a ‘moment,’ it’s for the American people to get some answers to these questions — whether it’s email, whether it’s the Clinton Foundation, whether it’s her economic plan,” the Fox reporter said. “And I would argue that it’s not serving her well to not take questions for so long. Because now, when does get questions, she’s struggling.”