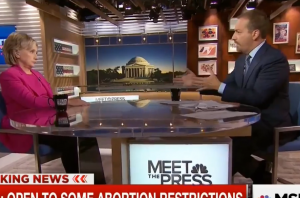 On Monday afternoon, Meet The Press host Chuck Todd debuted his MTP Daily by airing Part 2 of his sit down with Secretary Hillary Clinton, and by the looks of things the struggling Democratic frontrunner should have stopped there. After all, guest Eugene Robinson remarked after Part 1 on Sunday, “ I think if I were with the Clinton campaign, I would be very pleased with that appearance.”

However, the second half of Todd’s interview provided a tougher playground for Clinton, who when pressed to identify the ways she would be different from President Barack Obama, well, couldn’t. After mentioning Clinton’s repeated talking point that she is not running for Obama’s third term, Todd continued, “What’s a couple places you differ?”.

Clinton dug in her heels and evaded the question with her best effort. She noted, “I would have a different job.” She then gave the President copious accolades about him inheriting a fragile economic framework and how he needed to dig us out of a ditch (“which he has done”). When it seemed like Clinton had sufficiently wiped the surface clean of that question (presumably, with a cloth), Todd pushed back.

“But where do you differ with the President?”

For those of you keeping score at home, this is not an answer to the question, “But where do you differ from the President?”. To make matters worse, Clinton then offered up another popular critique of hers, which is that she would serve the “third term” of husband Bill Clinton. Her response? To highlight that the (hypothetical) circumstances she would inherit in January 2020 would be so drastically different from Obama and her husband that there’s just no way to know.

Clearly, Clinton is not a fan of the musical Hamilton or the defiant line from its titular character, “I would rather be derisive than indecisive”. Those eggshells beneath her feet remain calmly unharmed.

To Clinton’s credit, she did however provide some response to Todd, noting that if elected she would improve Obamacare and Dodd Frank, “build[ing] on what works”. With no explanation of any uniquely proposed policies or ideas, it’s evident that Clinton is simply trying to heighten what others have made successful.

Watch the video above, via MSNBC: