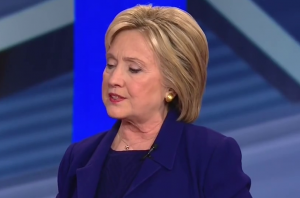 It’s remarkable that nine months into her presidential run, Hillary Clinton has failed to come up with a plausible explanation for arguably the single most damaging issue in the Democratic primary: why she took huge donations and speaking fees from Wall Street.

Anyone could have predicted that in a primary where Clinton was sure to get challengers from the left, her Wall Street ties were going to be an issue. But the most coherent explanation Clinton has provided to date was something along the following lines: I represented New York as a Senator, Wall Street is in New York, and by the way, 9/11.

Clinton’s 9/11 response went over like a lead balloon, and hasn’t been seen since she pulled it out during a December debate. But last night during the CNN Democratic Town Hall, Clinton debuted a new answer to address the particular question of why she took $675,000 in speaking fees from Goldman Sachs: because she didn’t know she was going to run for president.

HOST ANDERSON COOPER: One of the things that [Bernie Sanders] points to and a lot of your critics point to is you made three speeches for Goldman Sachs. You were paid $675,000 for three speeches. Was that a mistake? Was that a bad error in judgment?

CLINTON: Look. I made speeches to lots of groups. I told them what I thought. I answered questions.

CLINTON: Well, I don’t know. That’s what they offered, so… (LAUGHER) You know every Secretary of State that I know has done that.

COOPER: But they’re not running for an office…

COOPER: You didn’t think you were going to run for president again?

CLINTON: I didn’t. You know when I was Secretary of State, several times I said, you know, I think I’m done.

To begin with, when critics are essentially accusing you of legalized bribery, saying you took huge amounts of money because “that’s what they offered” has to be the single dumbest response I can think of.

But let’s focus on the “I didn’t know I was going to run” excuse. Regardless of the intention, Clinton’s answer just sounds bad. By saying she wouldn’t have taken the money if she knew she was running for president again, she makes it sounds as though her regret is purely political in nature. It jibes too well with her statement that using a private email server as Secretary of State was a mistake only because of the political fallout. Indeed, Clinton goes on to tell Cooper that she didn’t regret taking the money at all.

It’s also extremely disingenuous. From the second she left office in 2013, even a casual political observer knew that Clinton planned to run for president again. She can swear up and down that the notion suddenly popped into her head in April 2015, but voters simply aren’t going to buy it. At the very least, Goldman Sachs surely would have thought they were paying a future presidential candidate.

The “I wasn’t committed to running” excuse also fails to account for the fact that Clinton gave a $250,000 speech to private equity firm Apollo Global Management the same exact day she announced her presidential run. In the preceding months, she also gave $225,000+ speeches to giant corporations like eBay, UBS Wealth Management, Oracle, Wyndham Hotel Group, and more. And she only stopped personally taking cash from banks once she started running for president, at which point she focused on giving speeches at banks in exchange for campaign donations.

Most importantly, Clinton is entirely missing the point of the criticism. Yes, there are some worries that the transaction was something of a quid pro quo, and that Goldman Sachs’ speaking fees were intended to garner executive favors down the road. Clinton’s response that she hadn’t even decided to run for president yet adequately addresses that point.

But that’s only the worst charge. Sanders supporters also argue that Clinton’s paid Wall Street speeches show that she is too close and connected with Wall Street, that she is out-of-touch with everyday Americans and unable to understand their struggles, and that she is part of America’s elite 1%. Nothing Clinton said would assuage those worries. She acted as though explicit bribery was the only problem with the speech, while ignoring the host of other concerns that only serve to deepen an unflattering perception of Clinton among many Democratic voters.