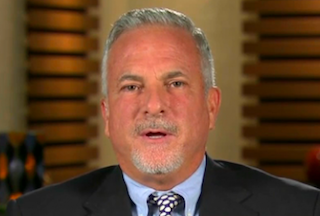 Remember Frank Taaffe? He’s the neighbor of George Zimmerman who spent much of last summer engaging in screaming matches with Nancy Grace on HLN. More recently, he joined Grace to offer up his defense of Michael Dunn, a man he doesn’t know, but believes was probably justified in shooting and killing a black teenager in Florida for playing loud music.

Before Taaffe was a talking head on HLN, he was probably best known for hosting “Standing Our Ground,” a white-supremacist podcast that took on such important issues as when it’s OK for white people to use the “n-word.” Liberal think tank Political Research Associates did the brave work of going through the podcast’s archives and came up with a clip of Taaffe repeatedly calling Oprah Winfrey a “n*gger.”

While his co-host did not think it was “appropriate” to use that word to describe the media mogul, Taaffe did not hesitate.

So, now you know just a little bit more about the man that HLN has on its new programs, defending men who shoot and kill black teenagers.

Listen to audio below, via YouTube (WARNING: NSFW language):