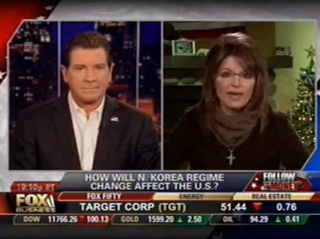 The death of North Korea tyrant Kim Jong Il has elicited a variety of responses from political figures on this hemisphere. Tonight on Follow the Money, Sarah Palin weighed in on both the death of the dictator and the missile launch shortly after in North Korea, and told host Eric Bolling she saw the danger as a reminder that America must focus on being secure, which means “energy independence” and “solvency with our economy.”

RELATED: Sarah Palin Tells Fox Business Network That ‘It’s Not Too Late’ To Jump Into The GOP Race

Bolling brought up the subject after some talk on the current debates in Washington which would, later, come around to the drone situation with Iran. But before then, he asked Palin for some thoughts on North Korea, and she began by asking for prayer “for some united there on that peninsula”– both for the well-being of those on the island politically and a government “that would allow the people of North Korea to have some food.” She also noted the short-range missile recently fired under the new leadership of the young and seemingly equally-unstable Kim Jong Un, describing it as “a firing shot across the bow to show the rest of the world that ‘we’re still here.'” To Palin, this was a reminder to be “wise in our foreign policy decisions,” and to take steps “for America to be secure, and that comes back to energy independence, that comes back to solvency with our economy… to make sure that we’re not reliant on other countries.” She concluded that America must make sure to continue “sweeping our own porch.”

These last comments concerned Bolling in light of the leadership of President Obama, “who has been apologetic towards the Muslim world,” particularly with Iran. “If [Kim Jong Un] is playing war games the first day in office,” Bolling argued, that was not a good sign, and “maybe it’s time to get a tougher president.” Palin replied in the affirmative, making the argument that the President had said as a candidate that he was open to talks with rogue nations, and that should have been a sign then that his policies would be what they are.